GOLD PRICES rose back above $1320 per ounce against a weakening US Dollar on Thursday as major government bond yields rose once more and Beijing played down rumors it might stop or cut its demand for US government debt.
Responding to Wednesday’s claims from Bloomberg that the People’s Bank may stop buying Treasuries as a protest against President Donald Trump’s rhetoric on China’s trade surplus with the US, “We learned the news through some media reports,” said the State Administration of Foreign Exchange, calling itself a “responsible investor” acting only on the “principle of diversification.
“In our opinion, the news may quote the wrong source of information, or it may be false news.”
The Euro replayed yesterday’s 1-cent gain, rising back above $1.20 and pushing the gold price for single currency investors back below €1100 per ounce.
World stock markets meantime extended Wall Street’s fall, with Tokyo’s Nikkei index trading 1% below last week’s 26-year high as the Yen continued to rise on the FX market.
The gold price in Japanese Yen today traded 1.5% below last week’s jump to 30-month highs. 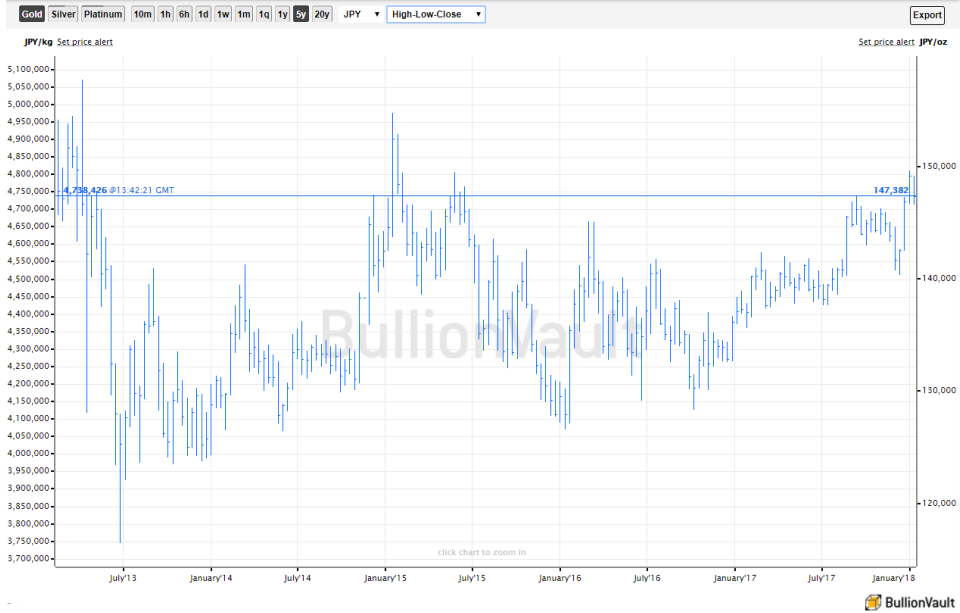 Mexico’s Peso and the Canadian Dollar meantime both fell to 1-week lows against the US currency after President Donald Trump said he’s pushing for a change to the NAFTA free trade agreement, and may pull out – as threatened during his election campaign – if Washington’s partners don’t agree.
“The most straightforward (& boring) explanation” for Wednesday’s report on Beijing’s T-bond holdings “is that China has hit its Treasury portfolio target [around] 40% and has no further need to buy if reserves are constant,” says Brad Setser, a senior fellow at the Council on Foreign Relations and former assistant secretary for international economic analysis in the US Treasury.
“But why not make a virtue out of a necessity and remind the Trump Administration of the possibility that China could impact US markets as it considers a set of trade remedies?”
The Chinese Yuan today edged higher on the FX market after being the only major currency to drop against the plunging US Dollar on Wednesday, a move Beijing refused to confirm or deny imposing on Chinese banks.
That helped the Shanghai gold premium rise to $8.80 per ounce above London bullion quotes, back near the typical incentive for importers to make new shipments into the world’s No.1 consumer nation.
The key gold buying festival of Lunar New Year will coincide next month with Valentine’s Day.
“Despite improving over 2016 levels, 2017 demand in Asia, gold’s biggest market, sits significantly below that of a few years ago,” write Emily Balsamo and Rhona O’Connell at specialist analysts GFMS Thomson Reuters in a new 2018 outlook,
“Purchases in the two largest consuming nations, India and China, were mixed [in 2017] with India recovering from low offtake in 2016, but with China hampered by faltering economic activity and reduced price expectations.”