GOLD PRICES sank 1.5% versus a falling US Dollar in Asian and London trade Monday morning, extending Friday’s fall from multi-year highs as world stock markets surged after UK opinion polls showed the Brexit campaign losing momentum ahead of Thursday’s referendum on membership of the European Union.
Having gained less last week, silver fell less on Monday, trading just 0.5% lower from Friday’s finish by lunchtime in London’s wholesale bullion market.
Eurozone and London shares jumped 3.5% on average, adding £50 billion to the value of the UK’s FTSE 100 index, as the Pound jumped back to $1.46 on the FX market.
Falling from just below $1300 to trade beneath $1280 per ounce, gold prices touched 2-year Dollar highs at $1315 last Thursday – the day that UK politician Jo Cox was murdered, spurring a halt to campaigning by both Leave and Remain leaders.
The latest opinion polls now either put Leave and Remain neck and neck, or give the status quo a good lead. 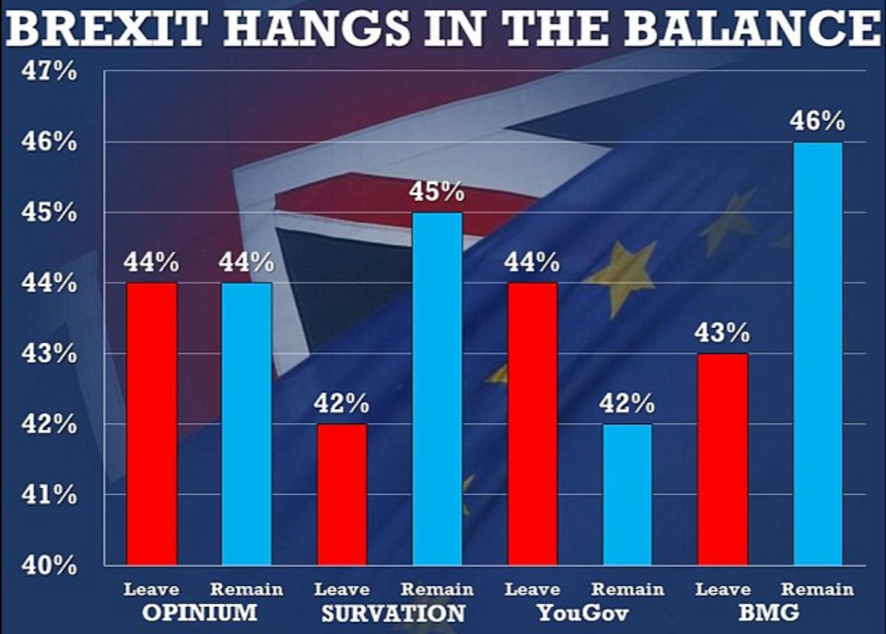 “Clearly this is helping calm the financial markets again somewhat,” say analysts at German financial services group Commerzbank, “as a result of which gold is currently in less demand.
“That said, the referendum will doubtless be the dominant theme this week…Uncertainty over the outcome should lend support to gold.”
Studying failed independence referenda in Quebec and Scotland, says German financial services group Deutsche Bank’s strategist Jim Reid, “The Leave lead might need to be more than 5% for there to be high confidence that this will be the final result.”
Priced in British Pounds gold has now lost 7% from Thursday’s 3-year high at £939 per ounce, and lost over 4% from €1189 per ounce in Euros.
Priced in the Japanese Yen, gold has now halved 2016’s early gains, adding 5.5% from New Year’s Eve.
As the People’s Bank of China said it poured the equivalent of $38.5 billion into domestic money markets last week, the Chinese Yuan fell sharply on Monday from a rally to 1-month highs versus the US Dollar.
That earlier strengthening had seen Shanghai gold prices fix at the equivalent of $1300 per ounce, even as London settlement was quoted nearer $1283.
US brokerage INTL FC Stone has raised the downpayment charged to clients trading gold, silver, Sterling and Euro derivatives, demaning 200% of the minimum margin required by exchange provider the CME Group.
“The recent surge in support for the Remain camp may have an influence on US monetary policy,” Bloomberg quotes Australian bank Macquarie’s analyst Matthew Turner in London, “with a win likely to give the Fed greater scope to increase rates sooner rather than later.”
Last Thursday’s jump to $1315 per ounce came after the US Federal Reserve held its key interest rate at 0.5%, citing this week’s Brexit referendum as one reason for caution.