GOLD PRICES whipped violently Friday on news of the strongest growth in US employment since October, recovering all of a sudden 2% plunge to head for the highest weekly close since March 2014 as traders continued to bet that the Federal Reserve won’t raise interest rates anytime soon.
The US government’s first estimate of June’s net addition to non-farm payrolls came in at 287,000 – almost as far ahead of Wall Street forecasts as May’s 6-year low was beneath them.
“A very strong jobs figure will trigger some short term pain for gold prices,” said Swiss refining and finance group MKS’s trader James Gardiner before the news.
“However, the underlying uptrend should prevail in the medium term.”
May’s strike by workers at telecoms giant Verizon had cut 37,000 jobs off the Bureau of Labor Statistics’ previous payrolls report.
“Largely reflecting” their return, the BLS said today, employment in the TMT sector rose 28,000 in June.
Already the weakest monthly jobs growth in 6 years, May’s figure was today revised down from 38,000 to just 11,000.
The US unemployment rate rose to 5.1% from May’s 8-year low of 4.7%. 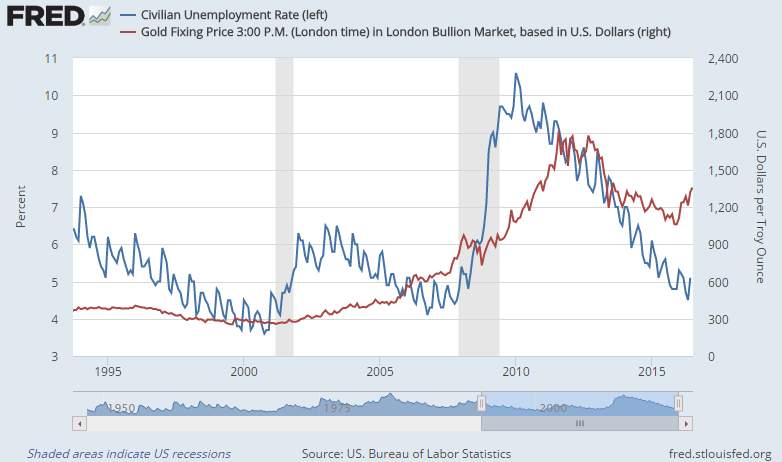 US interest-rate traders now see zero chance of a rate-rise from the Federal Reserve anytime before December, with the odds of a cut at the July meeting – reversing December’s first and only hike since 2005 – now priced at 1-in-27.
Analysts at Germany’s troubled Deutsche Bank financial services group now put the odds of a US recession at 60%.
The Eurozone’s negative deposit rate – now at minus 0.40% – is meantime higher than the yield offered by one-third of the 19-nation currency union’s government debt, making those bonds ineligible for the European Central Bank’s QE asset purchases stimulus.
UK consumer confidence following the Brexit vote sank in the first week of July, dropping at the fastest pace in 21 years according to opinion pollsters Gfk.
Top-end UK grocer and consumer goods chain John Lewis today warned the plunge in Sterling could become a “big issue…if inflation gets into the value chain.”
Inflation expectations have leapt according to Gfk’s survey.
The Bank of England, however, is now expected to cut its base rate at next Thursday’s meeting, with financial traders now seeing a 1-in-3 likelihood that the Bank will cut to zero by end-August according to retail stockbrokers Hargreaves Lansdown.
Major mortgage lenders this week cut their home-loan rates in anticipation a cut to Bank of England base rate.
Gold prices will rise 10% by end-2017 according to US investment and retail financial services group Bank of America Merrill Lynch, calling for $1500 gold.