GOLD PRICES headed for a second weekly fall against the Dollar today, down 1.1% from last Friday’s finish but recovering almost all this week’s 2.1% drop against the Pound as analyst chatter over new QE and ‘helicopter money’ grew after survey data said the UK economy is contracting at the fastest pace since the global financial crisis of early 2009 following the Brexit vote to leave the European Union.
The British Pound sank 1.5% – but held above the new 31-year lows of a fortnight ago – after Markit’s first-flash PMI report for July recorded the series’ steepest ever decline on both the Composite Output index and the Composite New Orders index.
New export orders, however, rose for the second month running, reaching near 2-year highs “mainly linked to the sharp drop in the sterling exchange rate,” according to Markit.
Gold prices for UK investors rose sharply to £1010 per ounce, just below last week’s finish at £1013.
New UK chancellor Philip Hammond said he will “reset fiscal policy” if data continue to worsen following the Brexit vote.
Hammond’s boss, new UK prime minister Theresa May, has already abandoned the previous Conservative leadership’s long-delayed aim of achieving a balanced budget by 2020 through its “austerity” program of cutting government spending.
On monetary policy, “The Bank of England has not done anything as yet,” notes Steve Barrow, FX strategist at investment and bullion bank ICBC Standard, “which says much about the relative robustness of the banking sector compared to some past crises.
“But action seems certain in August,” Barrow adds, forecasting a rate cut to new all-time historic lows of 0.25% in base rate plus up to £100 billion new quantitative easing – a rise of over 25% from the £375bn of government bond-buying already done.
The gold price in Sterling today traded 68% higher from when the Bank of England first began QE in March 2009, and held little changed above £1000 per ounce from when the last “injection” was made in July 2012.
London’s FTSE100 share index has meantime risen 71% and 19% over those periods. 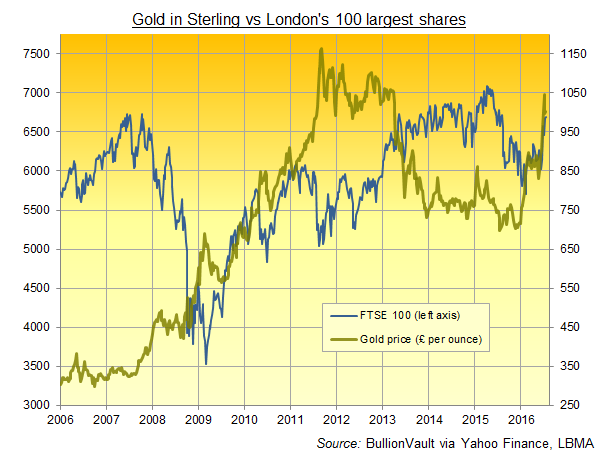 “I always thought the next global recession would force central bankers to climb into their helicopters,” says French investment and bullion bank Societe Generale’s strategist Albert Edwards, referring to economist Milton Friedman’s 1969 coinage of ‘helicopter money’ for central banks creating money and handing it straight to government, consumers or business.
“But we are getting mighty close to the abandonment of all pretence of monetary rectitude…A brave new world of direct, off-balance-sheet monetary alchemy awaits.”
Speculating on last week’s visit by former US Fed chairman Ben Bernanke’s to the Bank of Japan’s Haruhiko Kuroda – news which “pushed macro-[economic] scribblers into a frenzy of excitement,” says Edwards – “at last the [money] copters are being readied and central bankers can drop this disingenuous flimflammery of whether or not their QE easing programmes are really monetisation,” he concludes.
To date, the distinction between quantitative easing and helicopter money has been that QE money will eventually be withdrawn and cancelled as the central bank sells the assets bought with it.
After 15 years of QE and now applying negative interest rates to commercial banks, “We are only halfway to the exit from deflation,” Japanese prime minister Shinzo Abe told Bernanke in Tokyo last week. “We want to be steadfast in accelerating our breakaway.”
In 1999, whilst still a Princeton professor and before joining the Federal Reserve, Bernanke famously attacked the Japanese government and central bank for “self-induced paralysis” a decade on from the Tokyo real estate and stockmarket crash.
“Some intragovernmental cooperation would be required,” Bernanke said, if the Bank of Japan was going “to rain money on the population” as he advised – a policy he then suggested the US could utilize to defeat the risk of deflation in a 2002 speech as Fed governor, some seven years before he began QE as head of the US central bank.
Like the Dollar gold price – trading at $1324 lunchtime Friday in London – gold priced in Euros meantime halved the week’s earlier 1.9% drop, holding above €1200 per ounce as Asian stock markets closed lower but Western equities ticked up.
Having discounted all likelihood for some weeks, betting on US interest-rate futures now sees a 2.4% change of the Federal Reserve hiking its key rate for a second time in 7 years to 0.75% at its meeting next week.
Those odds rise to almost 1-in-5 for the Fed’s September meeting.