GOLD PRICES recovered or rose above last week’s closing level in terms of all major currencies on Wednesday, touching $1232 per ounce as the US Dollar slipped on the FX market and European equities fell ahead of Donald Trump’s meeting on trade with Jean-Claude Juncker.
“I have an idea,” tweeted the US President over night.
“Both the US and the EU drop all Tariffs, Barriers and Subsidies! That would finally be called Free Market and Fair Trade! Hope they do it, we are ready – but they won’t!”
European stock markets slipped Wednesday as the Euro rallied versus the Dollar following stronger-than-expected German economic sentiment surveys.
US bond prices rose, nudging longer-term Dollar interest rates down from 5-week highs.
Trump today also attacked China after announcing $12 billion in aid to US farmers hit by the tit-for-tat retailiation against the trade tariffs he has imposed on foreign imports – a sum dismissed by some agricultural groups as too small to cover the sector’s losses.

China is targeting our farmers, who they know I love & respect, as a way of getting me to continue allowing them to take advantage of the U.S. They are being vicious in what will be their failed attempt. We were being nice – until now! China made $517 Billion on us last year.

The Chinese Yuan today rose from 12-month lows against the Dollar, helping raise the Shanghai gold premium – over and above quotes for London settlement – by $1 from yesterday’s 10-month low of $2.60 per ounce.
That was still barely one third the typical incentive for new imports of gold into the metal’s No.1 consumer nation.
Household gold investment demand in China fell nearly 16% over the first half of this year says the Platts news and data agency, citing figures from Beijing’s China Gold Association.
“We’re starting to see signs of the physical market adjusting to these lower prices,” said analyst Suki Cooper of bullion market-making bank Standard Chartered today.
“We’re [also] seeing gross short positions [amongst Comex speculators] at record highs, which suggests that position is at an extreme.
“US retail investment demand has [also] started to pick up, with gold coin sales rising in May, June and July.”
“If I look at the market at the moment,” said John Reade of the mining-industry’s World Gold Council recently, “the biggest drivers seem to be the US Dollar and real US interest rates.”
So with the Dollar rising as US interest rates also rose faster than market expectations of inflation, “I don’t find anything strange about these movements” in gold prices falling, Reade said. 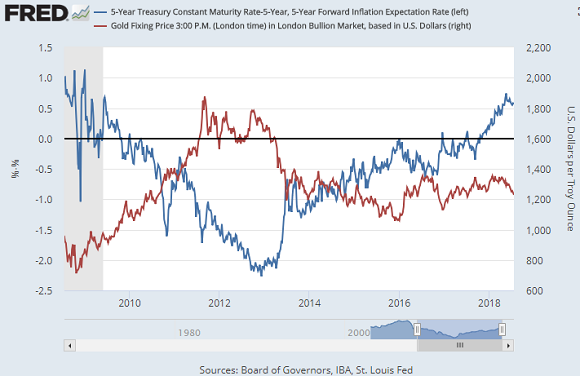 Analysis by BullionVault shows gold prices moving in the opposite direction to real US interest rates more than 60% of the time over the 10 years to end-2017.
That has fallen however to 40% so far in 2018, and across the 52 weeks to mid-April – when gold priced in Dollars touched the top of the last half-decade’s trading range even as real US rates jumped – the metal showed its strongest co-movement with inflation-adjusted 5-year yields since 2006.
“Against the Dollar,” says a note from Council on Foreign Relations’ senior fellow Brad Setser, “the Yuan is back where it was ten years ago even though China’s economy is far more productive and technologically sophisticated.”
Predicting that Beijing will seek “a controlled depreciation” rather than letting the Yuan float freely, “another 10% move would more than offset the projected impact of Trump’s [current] tariffs,” he concludes.
This week’s announcement of stimulus spending, plus the U-turn on tighter lending standards, has also seen the People’s Bank of China “intervening directly in the bond market to stimulate the economy,” says an economist quoted by the Nikkei Asia.
“China’s crackdown on widespread off-the-books lending, known as shadow banking, caused corporate bond defaults in the first half of 2018 to swell 40% in value year on year,” the paper says.
“A number of businesses with low credit ratings have abandoned plans to float debts.”