GOLD PRICES edged 0.3 percent higher on Monday lunch time, after falling $15 from $1300 per ounce last Friday, as news broke that President Trump’s chief strategist Steve Bannon had left his position at the White House. $1300 per ounce was the highest gold price since the U.S. presidential election.

This latest upheaval in the Trump administration followed the resignation of several top CEOs from President Trump’s Manufacturing Council, following his weak response to the Charlottesville march. The President announced in a tweet last Wednesday that he was ending the Council.

The council’s disbandment and Bannon’s departure has raised more questions about the Trump administration’s ability to implement its pro-growth agenda.

The tensions around North Korea have also intensified as Pyongyang warned on Sunday that military exercises were “adding fuel to the fire.”  The annual joint military exercise between the US and South Korea began today. Kim Jong-Un did not follow through on his threat of last week to land four ballistic missiles in the waters around the US Pacific territory of Guam.

“Demand for gold is likely to remain high nonetheless, as the US and South Korea began a joint military exercise earlier today. This could rekindle the conflict between the US and North Korea, which had taken something of a back seat again recently.” said Commerzbank’s in a note.

The MSCI All-Country World Index declined 0.1 percent to the lowest in almost five weeks on Monday, Nikkei 225 was down 0.40%,  the Korean KOSPI Index fell 0.14%, although the Chinese stock markets finished higher.

From Thursday this week, top central bankers including US Federal Reserve’s Janet Yellen and ECB’s Mario Draghi, will meet in Jackson Hole, Wyoming for the annual Economic Policy Symposium to discuss the critical economic issues facing the world economies.

The global market will be paying keen attention to the event as the Fed chair, Janet Yellen, is the first leading figure to speak at the event on Friday, followed by Draghi later in the day.

Yellen said in June 2017 that the Federal Reserve would begin to reduce the size of its balance sheet “relatively soon”, leading to speculation the central bank could start to reduce reinvestments of maturing securities it holds this year.

“The market spotlight will likely focus on Yellen, given the generally low U.S. inflation environment and the likelihood of Fed balance sheet reduction occurring relatively soon.” Citigroup strategists including Peter Goves wrote in a note to clients.

The Managed Money category of traders in Comex gold futures and options increased the net long position nearly 30% to 558 tonnes last Tuesday according to data released Friday by US regulators the CFTC.  The net long position has been rising 5 weeks in a row to reach the highest level since the 4th October 2016, when concerns over a possible Trump victory were heightened. 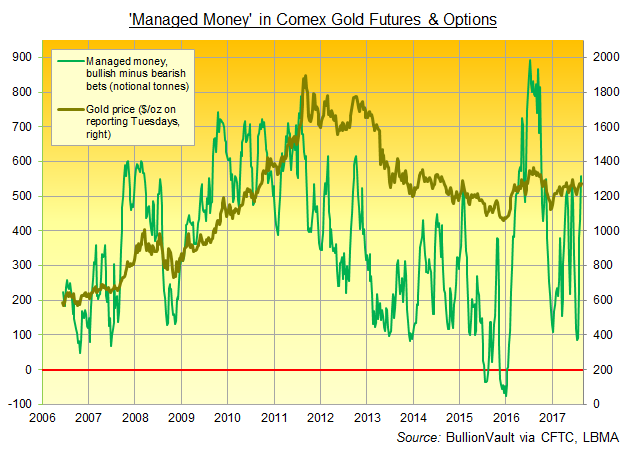 The giant SPDR Gold Trust (NYSEArca:GLD) has increased its holding by 12.3 tonnes to 799 tonnes last week.  It was the first weekly gain since the week of 12th June 2017.