GOLD PRICES fell to new 6-week lows in London trade Monday as the Dollar rose and world stock markets edged higher.
The Euro slipped after Sunday’s clashes with civil police in Spain’s Catalonia region as people voted for independence in what the national government called an illegal ballot.
“With this day of hope and suffering,” said regional president Carles Puigdemont in Barcelona, “the citizens of Catalonia have won the right to an independent state in the form of a republic.”
Gold priced in the Euro meantime crept back up to €1085 per ounce as the single currency slipped on the FX market, unwinding last week’s €2 drop but holding 4% below early September’s 4-month high.
“The prospects of further monetary tightening in developed economies have started to weigh on the price of gold,” says a note from head of precious metals sales Tom Kendall at Chinese-owned bullion bank ICBC Standard, pointing to the Fed and ECB discussing balance-sheet reduction while the Bank of England’s “hints” at UK rate rises.
Whilst gold-backed ETF trust funds expanded slightly amid gold’s 1.5% price drop last week, latest data from the Comex gold futures and options market show professional money managers cutting their bullish bets on the metal’s price to a 5-week low, while bearish bets grew to a 7-week high.
Overall that trimmed the net speculative position for the second week running, down to the notional equivalent of 708 tonnes – some 50% greater than its historic average. 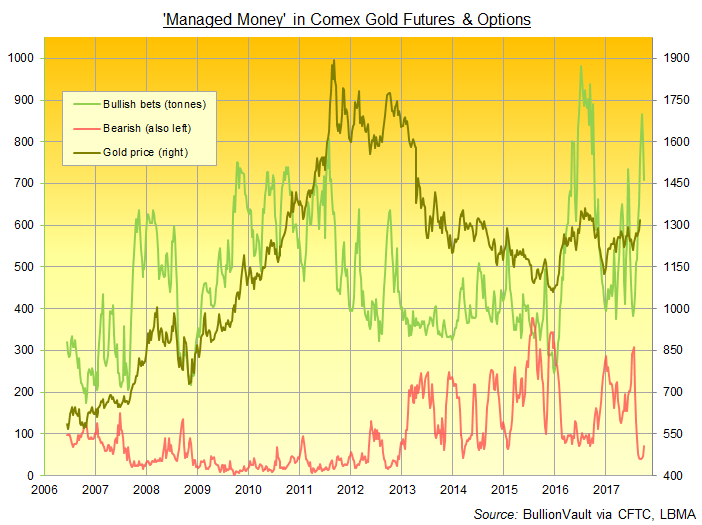 Comex silver contracts also saw money managers cut their overall bullish stance last week, but it held 86% greater than its historic average.
Silver prices today touched the lowest Dollar level in 8 weeks at $16.56 per ounce, before popping back above last Friday’s finish to reach $16.70.
Looking at gold, “the Indian implementation of a Goods and Services Tax and the extension of anti-money laundering legislation…are causing yet more disruption to this key source of bullion demand,” says Kendall at ICBC.
Now entering the key autumn festive period, gold buyers in India are adapting to new AML rules by sidestepping them, the Business Standard reports, with purchases recorded as conversions of pre-existing jewelry, a longstanding and common service across the world’s No.2 consumer market.
Wholesale markets in No.1 consumer China are now shut meantime for this week’s National Day holidays.
“Liquidity noticeably down,” says a trading note from Swiss refining and finance group MKS, and “given the absence of China today – usually buyers on dips – there was little in the way of support for gold.”
But looking ahead, Kendall concludes, “Political divisions [in the US] and the tail risk of a sharply rising US deficit in years ahead, combined with the ongoing geopolitical tensions in Asia, suggest that the downside to gold from here is limited.”
With votes from 42% of Catalonia’s  5-million registered electorate now counted, 90% said “Yes” to independence, the Generalitat government of Catalonia declared overnight.
“It’s time for mediation,” said president of the Generalitat Carles Puigdemont, “and mediation must be international in order to be effective.”
Spanish bond prices fell Monday, pushing 10-year yields up towards 3-month highs near 1.70% per year, while all but 4 of the companies in Spain’s Ibex 35 stock index fell.
That pulled Madrid’s main index 1.7% down for the day, holding it over 8% below May’s 2-year high.