GOLD PRICE gains of 0.5% from last Friday’s finish held firm in London trade today as world stock markets recovered more of this week’s drop and commodities also rallied after falling from their recent multi-year highs.
Gold held at $1282, some $5 per ounce below Wednesday’s attempt at 4-week highs versus the US Dollar.
This week’s drop in the Dollar’s exchange rate against Euros and Yen edged gold prices down 0.5% and 0.2% for European and Japanese investors respectively.
The UK gold price in Pounds per ounce today traded 0.5% higher for the week at £971 as Minister for Exiting the European Union David Davis said he’s made “compromises” with EU negotiators.
Irish Prime Minister Leo Varadkar vowed to block talks on a post-Brexit trade deal if London doesn’t explain its plans for the border between Eire and Ulster.
Major gold producers Canada and Australia meantime saw gold prices rise sharply this week as their ‘commodity’ currencies weakened, up 1.1% and 2.1% respectively to 2-week and 5-month highs.
“That’s even with iron ore higher and copper rallying,” says one spread-betting broker.
Reaching a 17-year high in 2016, Australia’s gold mining output – the second-largest behind China – is set to peak in 2021 according to a new report from specialist consultants MinEx, before halving from current levels by the late 2050s. 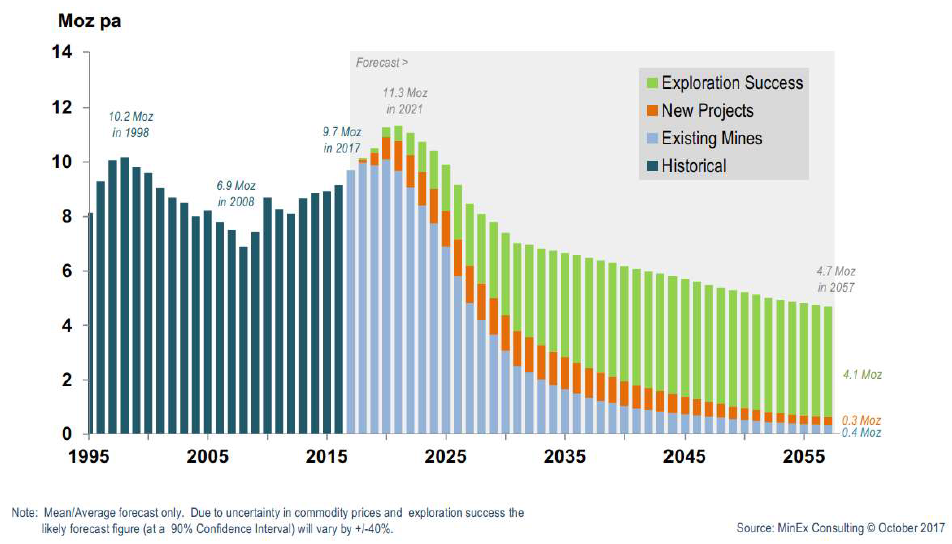 A slight decline in world silver output is being offset in 2017 by a rise in scrap recycling “driven largely by higher Asia flows,” says Johann Wiebe, lead analyst at Thomson Reuters GFMS.
Presenting his latest market review to this week’s annual Silver Institute dinner in New York, Wiebe also forecast a 5% fall in global silver demand for 2017.
That will give the overall market a small surplus after 4 years of consecutive silver deficits on GFMS’s new data.
Silver this week doubled the gains in gold prices, rising 1.1% against the Dollar to $17.08 per ounce after closing around $16.88 three weeks running.
A small rise in the Chinese currency’s Dollar exchange rate earlier saw Yuan gold prices end unchanged on Friday.
That cut the premium for metal settled in Shanghai to $7.50 per ounce above comparable London quotes, some $2 below the typical incentive for new imports to the world’s No.1 gold consumer nation.
Gold prices in No.2 consumer India meantime “flipped” from a $2 premium to a $2 discount this week, reports Reuters, with rising Rupee prices denting demand despite the current Hindu wedding season.
“Retail demand is weak, jewellers are not restocking,” the newswire quotes a Mumbai bank dealer.
“They are waiting for a price correction.”
Next month’s regional elections in Gujarat also mean “the administration is keeping a close vigil on the movement of money” in the wealthy western state, says Haresh Acharya of the Bullion Federation in Ahmedabad, “[and] this has slowed down the movement of gold.”
Investors in emerging-market bonds last week exited at the fastest pace since New Year, according to consultants EPFR.
High-yield bond funds worldwide lost the 3rd largest sum on the data provider’s records, says Bloomberg.
US junk bond trust fund the SPDR Bloomberg Barclays High Yield Bond ETF was headed today for a small weekly gain after setting fresh 7-month lows on Wednesday.
The delinquency rate among so-called “sub-prime” US consumers buying new autos on credit “is rising [thanks to] stagnant wage growth, higher interest rates, rising gasoline prices and falling second hand car values,” says a new note from Chinese-owned bullion and commodities bank ICBC Standard.
Presenting “a material and rising threat to US auto sales,” says ICBC analyst Marcus Garvey, “that carries negative implications for palladium – where US autos account for c.20% of global demand – but positive implications for gold.”
Weaker consumer borrowing, says Garvey, “could act as a brake on the pace of Fed hikes in 2018.”