GOLD PRICES rallied again versus the weakening Dollar in London trade on Tuesday, briefly touching $1330 per ounce as the US currency extended its losses after President Trump sent his 2019 fiscal plan to Congress for approval.
“After so stupidly spending $7 trillion in the Middle East, it is now time to start investing in OUR Country!” tweeted Trump on Monday.
With the US military this month launching its First Security Force Assistance Brigade to “train, advise, assist, enable and accompany” government forces in Afghanistan, US forces attacked by Russian mercenaries in Syria last week killed perhaps 100 opponents and wounded 200-300 more, Bloomberg News quotes various sources.
Russian news agency Kommersant says that friends and family of 4 staff from private military company Wagner confirmed their deaths.
The giant SPDR Gold Trust (NYSEArca:GLD), the world’s largest gold-backed exchange traded trust fund vehicle (ETF), meantime ended Monday unchanged in size, needing fewer than 821 tonnes of gold to back its outstanding shares – the lowest level since end-October. 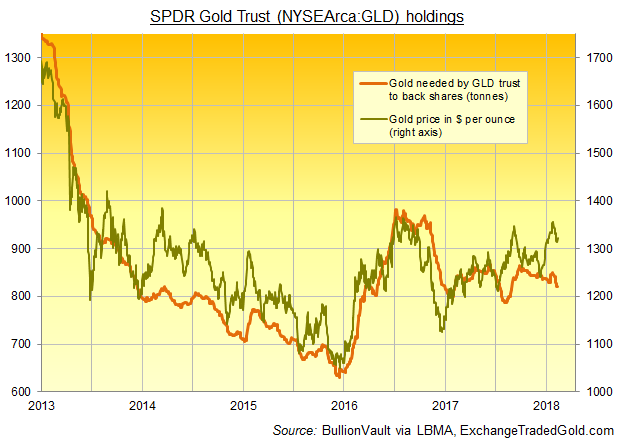 Releasing his latest Budget plan on Monday, Trump has now “given up” his hope of balancing US federal spending with tax revenues before 2028 according to the Wall Street Journal, quoting a key White House source.
“Combined with a newly passed spending deal and sweeping tax cuts, the [new 2019] budget would see the [annual] federal deficit once again rising past $1 trillion in the near-term,” says Fox News.
“Trump’s budget statement calls deficits the harbingers of a ‘desolate’ future,” says the New York Times, “but the White House plan would add $7 trillion to the deficit over the next 10 years.”
With the Dollar falling again on Tuesday, the Euro reached 1-week highs above $1.23 while the Japanese Yen extended its surge towards September’s 10-month highs.
That held the gold price in Japanese Yen down near Friday’s drop to 8-week lows beneath ¥4,600 per gram.
With 2 days until China’s financial markets shut for a week of Lunar New Year holidays, gold prices in Shanghai meantime traded just $5.75 per ounce above comparable London quotes.
Reflecting demand and supply in the world’s No.1 gold consumer nation, that incentive for new imports was barely two-thirds of the average premium for Shanghai gold.
Over the last month, the premium has averaged just half what it averaged over the month preceding Chinese New Year 2017.
Shanghai’s CSI3000 stockmarket index meantime followed Wall Street higher overnight, rallying 1.2% while Hong Kong equities added 1.3% on Tuesday.
Japan’s Topix fell 0.9% however, down for the 10th session in 14, while Eurozone equities lost 0.6% on average by lunchtime in London.
India was closed for the Mahashivratri festival.
Ten-year US Treasury yields edged lower once again from 2.87% – retreating from that 4-year high for the 6th time in 7 sessions – while UK Gilt yields pushed higher after new data said that consumer-price inflation in the world’s 5th largest national economy again held just shy of November’s 5.5-year high of 3.1% per annum in January, with a “continued upward effect…from all categories of goods and services.”
Last week the Bank of England kept its key UK interest rate unchanged at a near all-time low of 0.5% with its QE stimulus asset purchases at a record high of £445bn.
The UK gold price in Pounds per ounce rose this morning above £956, touching 1-week highs.
Tomorrow brings inflation data from the US and Germany, plus end-2017 economic growth data from Germany and Japan.
Gold priced in the single-currency Euro today held flat from last week’s finish at €1075 per ounce.