GOLD PRICES fell to 6-week lows against the Dollar but held firm against other major currencies in London trade Tuesday, extending its recent pattern into the first day of May.
With China and most European financial markets shut for May Day, gold fell 0.4% to $1308 per ounce as the Dollar rose on the currency market.
Sales of new American Eagle gold coins last month fell to their lowest monthly level since before the financial crisis began in 2007, data from the US Mint show.
Interest in gold among larger private investors also fell again, according to data from BullionVault, with the number of both first-time and repeat buyers dropping to the smallest size since gold prices hit their bear-market lows at end-2015.
Dropping 0.8% across last month, gold ended April with its lowest monthly finish of 2018 so far in Dollar terms at $1313.20 per ounce.
Priced in British Pounds in contrast, gold ended April with its highest monthly close since December.
In Euro terms, gold set its highest monthly finish since October. 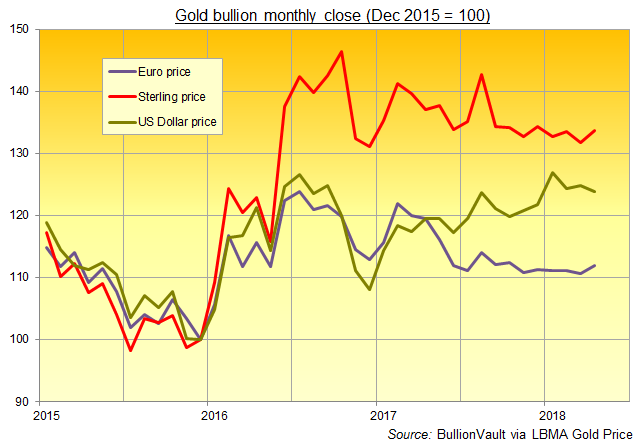