GOLD PRICES fell beneath yesterday’s 1-month lows in London trade Thursday, dipping to $1278 per ounce as most commodities edged higher with world stock markets.
With gold prices now falling almost 6% from early September’s 12-month Dollar high, silver today fell to $16.70 per ounce – down more than 8% from 3 weeks ago.
Platinum meantime dropped to 9-week lows beneath $920, trading below sister-metal palladium for the first time in 16 years.
Following Janet Yellen’s comments from Tuesday on needing to tighten US policy sooner than expected, US Treasury bond prices also fell again, driving the interest rate offered to investors by 10-year notes up to 2.34%, the most since 11 July.
Gold was then trading at $1211 per ounce.
Betting on US interest rates now see a 76% chance of the Fed raising at its December meeting, up from just 33% one month ago.
“Gold is easing back towards the recent low at $1275.69,” says technical analyst Karen Jones at German financial services group Commerzbank, calling this month’s drop a ‘correction’.
“We should see the market attempt to stabilise between here and the 200-day moving average at $1247.65.” 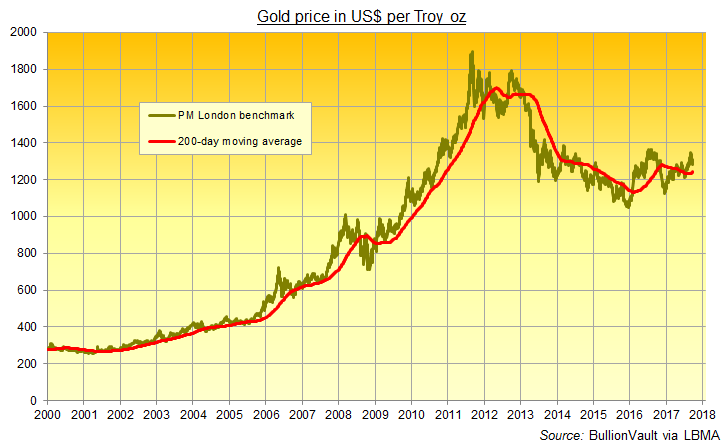 With China’s ‘golden week’ holidays to mark National Day not in fact beginning until Saturday, bullion delivered via the Shanghai Gold Exchange today slipped only 0.7% against the Yuan, while Dollar spot prices fell 1.1% from early Wednesday.
That buoyed the Shanghai premium, over and above quotes for London settlement, just above its typical $9 per ounce average.
Trading in Shanghai’s main spot gold contract was meantime one-third greater today than August’s average daily volume in Yuan terms, and 16% larger than 2017’s daily average to date.
Looking at imports to the world’s No.1 consumer nation, “Data have confirmed…weak gold demand in China,” said a note earlier this week from Commerzbank’s commodities team, with August’s imports to the mainland from Hong Kong the lowest since January.
“At 485 tonnes, net imports [from Hong Kong] in the first eight months of the year were 70 tonnes down on the same period last year,” says Commerzbank, while “direct gold imports from [global refining center] Switzerland were already weak in August.”
Swiss export data show direct exports to mainland China outpacing shipments via Hong Kong however, accounting for 55% of the 366 tonnes sent to China and Hong Kong combined so far in 2017.
In other markets, the Euro on Thursday bounced from 5-week low against the Dollar – driving the gold price for German, French and other Eurozone investors back down to €1090 – while the British Pound recovered from 2-week lows.
London’s FTSE100 was the only major European stock index to fall, however, as UK Prime Minister Theresa May gave what journalists called “a defence of capitalism” in a speech at the Bank of England, widely cast as a response to this week’s socialist Labour Party conference in Brighton.
Rising in contrast to the other precious metals meantime, “Palladium has the wind in its sails” says Japanese conglomerate Mitsubishi analyst Jonathan Butler, pointing to “investor interest…a good amount of speculative activity…physical demand in Greater China [and] all the news we’ve been hearing about the electrification of vehicles [which] implies more gasoline hybrid vehicles.”
Primarily used in diesel-engine catalysts, the price of platinum has now retreated to its lowest price since mid-July in Dollar terms and a 19-month low against the Euro.