GOLD PRICES edged 0.5% lower from yesterday’s new 8-week high versus the Dollar in London trade Wednesday, holding above $1211 per ounce as world stock markets ticked higher and official estimates showed the fastest rate of inflation for US consumer prices since spring 2014.
Rising to 2.1% per year in December, in line with analyst forecasts, CPI inflation breached the US Fed’s annual 2% target for only the 10th month of the last 60, led by a sharp rise in gasoline prices.
The British Pound retreated today from its sharpest 1-day bounce since 2008 after UK Prime Minister May’s Brexit speech and rising inflation data saw bearish traders caught off-guard.
That helped the gold price for UK investors rise Wednesday back above last Friday’s finish at £981 per ounce, the highest weekly close since early November’s pre-Trump election peak near 3-year highs.
The Dollar meantime bounced Wednesday from its sharp drop following the Wall Street Journal reporting an interview with Donald Trump in which the president-elect – inaugurated this Friday – said “Our Dollar is too strong.
“Our companies can’t compete with [China] now because our currency is too strong. And it’s killing us.”
“Currency wars might be seen as a thing of the past,” says Chinese-owned commodities deal ICBC Standard Bank’s forex strategist Steven Barrow, pointing to the post-global financial crisis use of quantitative easing by the US Fed.
“However it might be this was merely the hors d’oeuvres ahead of the real currency wars about to start.”
But “wanting a weaker Dollar,” says Barrow’s colleague at ICBC Standard Tom Kendall in a separate gold-price note, “doesn’t sit well with some of the Trump camp’s other proposals.”
Lower corporation tax, repatriation of foreign earnings, and “onshoring” of manufacturing jobs lost to foreign countries all likely mean “an increased flow of inward investment and capital,” says Kendall, leading the Federal Reserve to raise its key interest rate to temper inflationary pressures.
“Is all of this tightening priced in already? We don’t think so.”
Betting on US interest-rate futures currently sees the Fed staying on hold until its mid-June meeting.
Just over one-third of betting on December’s meeting then see 2017 ending with one further hike, taking the Fed Funds rate to a ceiling of 1.25%.

Like the Dollar gold price, US Treasury bonds also retreated from 8-week price highs Wednesday, pushing the yield offered to new buyers by 10-year debt up 0.04 percentage points to 2.37% per annum.
The Yuan rose to its strongest level since late November, but gold prices rose faster, pushing the Shanghai premium for metal landed in the world’s No.1 consumer nation to $17 per ounce above London quotes, almost 7 times the typical incentive to new imports.
Starting at the end of next week, the Chinese New Year holidays have consistently marked the heaviest period for household gold demand since deregulation began 15 years ago.
“Prima facie gold is a disaster,” says Ross Norman, now manager of retailer Sharps Pixley and formerly a gold trader at N.M.Rothschild and then Credit Suisse, “with the key demand sectors including India, China and central banks softer compared to recent years.
“Yet we remain bullish [because] a plethora of epic black swans could so easily put financial markets into a tailspin…[such as] the Eurozone elections, Middle Eastern geopolitical tension, debt ceilings, trade war between the US and China – but most of all, significant inflation.”
The third most successful forecaster in the London Bullion Market Association’s annual price prediction contests, Norman sees the gold price averaging $1310 per ounce in 2017 – a rise of 4.7% from 2016’s near-8% rise.
Holdings in the world’s largest gold-backed ETF, the SPDR Gold Trust (NYSEArca:GLD), ended Tuesday unchanged despite the 2.1% rise in Dollar gold prices. 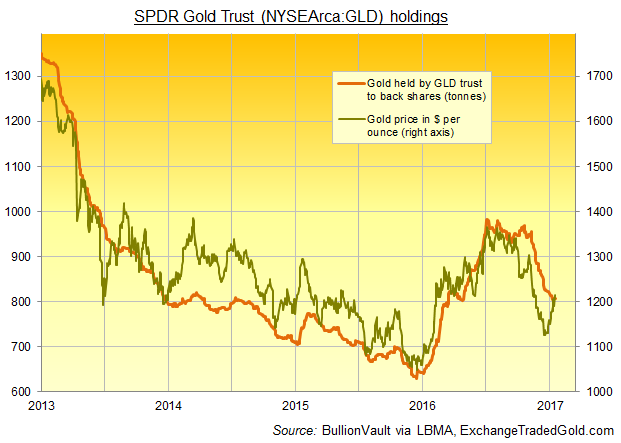