GOLD PRICE gains of $5 per ounce reversed in London trade Tuesday lunchtime, pulling the metal back from 7-week highs at $1270 but holding above what one analyst identifies as a “critical” trendline against the US the Dollar.
“Gold is at a critical juncture,” says strategist Jonathan Butler at Japanese conglomerate Mitsubishi in his latest weekly report, “having just broken out of a long-term downtrend by closing above the monthly trend line that can be traced back to the all-time high of 2011.” 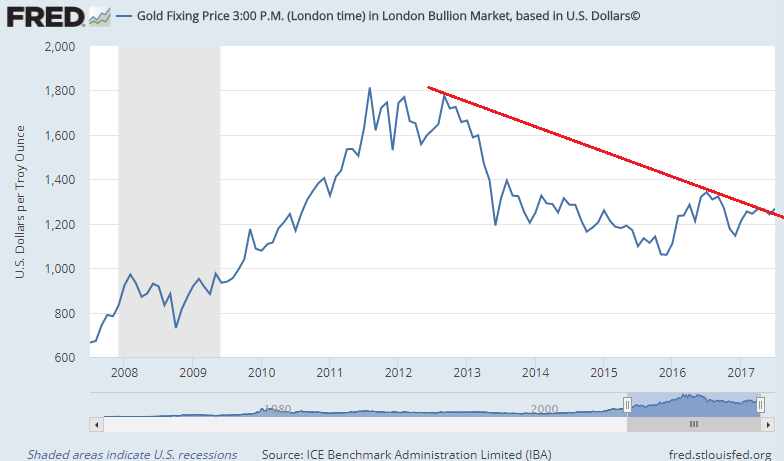 “Trend line resistance in force since the all-time high in 2011 [now comes in] at $1286/1295,” counters a daily chart analysis from French investment and bullion market-making bank Societe Generale.
A break of that level “would be seen as a significantly advanced bullish signal and would propel gold towards $1315…and $1356,” says SocGen’s technical team.
Meantime, “Gold is in danger of short term profit taking,” says Butler, “and if US jobs and PMI data [due Wednesday through Friday] show strength this week a resurgent Dollar will weigh on prices.”
The Dollar bounced Tuesday from yesterday’s new 31-month lows below $1.18 per Euro as new US inflation data came in just ahead of analysts forecasts and despite strong economic data from the 19-nation single currency union.
Growing 2.1% per year in Q2, the Eurozone’s gross domestic product matched its strongest expansion since the start of 2015.
Ahead of this week’s US jobs data, betting on September’s Federal Reserve policy meeting now sees a near 99% chance of “no change” from the current interest-rate ceiling of 1.25%, sharply higher from the 82% probability suggested by futures-market speculation this time last month.
But “we view [the Federal Reserve’s] forthcoming quantitative tightening to be a key downside risk for gold,” warns Butler, pointing to the link between Treasury bond yields and the price of non-interest bearing bullion.
“A change in market sentiment in the weeks ahead towards pricing in a rate rise in the fourth quarter,” he says, “alongside monetary tightening [as the Fed starts to unwind its current $4.5 trillion holdings of US debt] may rattle the bond markets and gold in the way that the taper tantrum did in 2013.”
“Yellen is…a very partisan Democrat,” says former merchant banker and now financial author Martin Hutchinson, “[and] she has regarded the world in a very different way since Donald Trump was elected President.
“To her, he is clearly unworthy to benefit from her magic beans of monetary stimulus. Hence, she withholds them.”
Approving of Yellen as a “low-interest-rate person” last week, Trump also said he’s considering Gary Cohn to lead the Federal Reserve when Yellen’s first term ends in 2018.
CEO of US investment bank Goldman Sachs until joining the White House as director of the National Economic Council this January, “We just had a cabinet meeting,” Cohn told reporters Monday, “[and] the president is 100% committed to getting tax reform done this year” – a major key election pledge so far unrealized.