The GOLD PRICE extended its gains and rallied to a 6-week high on Monday morning after London was struck by another terrorist attack at the weekend but oil prices sank despite rising geopolitical tensions in the Gulf region, writes Steffen Grosshauser at BullionVault.
The stock exchange in Qatar fell by nearly 8% – and crude oil retreated below $50 per barrel – as a four-country alliance led by Saudi Arabia cut diplomatic ties with the small but rich Arab state, accusing it of facilitating terrorism through its relationship with Iran and support of the Muslim Brotherhood.
Election campaigning meantime resumed in the UK after Saturday night’s murder of 7 people around London Bridge – the 3rd such “home grown” Islamist terror attack in the UK inside 3 months.
The ruling Conservative Party of Theresa May remains ahead in most surveys, but Socialist Jeremy Corbyn’s Labour Party could achieve a “shock” according to one pollster.
“[European elections] have been an underlying supportive factor for some time [for gold prices], providing some good safe-haven buying but not enough to spark any panic buying”, says Australian bank ANZ commodity analyst Daniel Hynes.
“That’s why we think things will be relatively subdued.”
Silver prices today held in line with Friday’s 6-week closing high, trading at $17.59 per ounce after new data for last week showed hedge funds cutting their bearish bets against the metal at the fastest pace since November, down 26% from the previous week’s near record level. 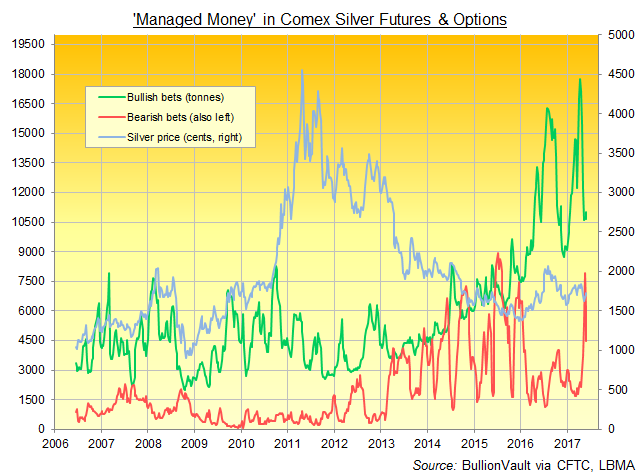 Gold held steady on Monday after hitting $1282 per ounce – the highest since 23 April – after jumping 1.1% on Friday following lower-than-expecting US jobs data.
“Contrary to most headlines, it was not the payrolls figures that pushed gold up but weak inflation data,” said a note from strategist Tom Kendall at Chinese-owned bullion clearer ICBC Standard Bank, pointing in particular to “anemic” US wage growth.
“The bond market and the Fed have overestimated inflationary pressures…[and as] the risks of an aggressive tightening cycle by the Fed recede…that all means a reduced opportunity cost of holding gold and greater motivation for income funds to allocate something to it.”
The latest US consumer price inflation data are due on Wednesday next week, the same day as the Federal Reserve votes on its widely expected June interest-rate decision and issues new projections for inflation, GDP growth and its own rates outlook.
“Chances are that the Fed will certainly hike in June,” reckons Bart Melek of Canada-based brokerage TD Securities, “but after that, the certainty and then the rate that they’ve been talking about may not actually materialize.
“We’re fairly confident that gold prices should do well.”
“In the light of recent weaker US economic figures, the consensus for a June rate hike is weakening and the entire concept of further raises this year is being called into question,” agrees London brokerage Marex Spectron in a note.
“So focus will be on the next resistance level [of $1300], which is more of a psychological one than anything else.”
After gold prices tested their ‘game changing’ downtrend running since the all-time 2011 high of $1920 last Friday, “Prices may test $1475 before the end of this year,” believes Nikos Kavalis, director of London-based precious metals consultancy Metals Focus.