GOLD PRICES fell in London trade Tuesday, losing 1.5% from yesterday’s 2-week Dollar high before rallying to $1250 per ounce as US President Donald Trump began a 7-day trip taking in Nato’s HQ in Brussels, dinner with Queen Elizabeth II in London, his own golf course in Scotland, and a meeting with Russia’s President Vladimir Putin.
World stock markets edged higher as the Dollar pushed back the Euro single currency.
Oil jumped near new multi-year highs but government bond prices slipped, nudging longer-term interest rates higher.
The British Pound meantime rallied, recovering half yesterday’s 2-cent plunge versus the Dollar after pro-Brexit politician Boris Johnson resigned as Foreign Secretary over Prime Minister Theresa May’s plan for the UK’s post-March 2019 trading relationship with the European Union – now set for debate next week among the EU’s remaining 27 member states.
President Recep Tayyip Erdoğan of Turkey, the No.5 gold consumer nation, overnight appointed a new Chief of General Staff from the armed forces using his first decree under sweeping new executive powers granted to him first by a referendum last year and then confirmed by last month’s general election.
Joining Trump in Brussels for the Nato summit later this week, Erdogan was newly sworn in at a ceremony Monday attended by Italy’s former leader Silvio Berlusconi, Venezuela’s current president Nicolas Maduro, and Russia’s former president and ex-prime minister Dmitry Medvedev.
Like gold prices, silver also fell and bounced Tuesday as Trump’s trip began, falling to $15.91 before recovering the $16 per ounce level.
Since silver prices were last at Monday’s level peak of $16.21 per ounce, the largest silver-backed ETF investment fund – the iShares Silver Trust (NYSEArca:SLV) – has swollen by 1.8%, needing an extra 180 tonnes of backing to reach a 12-month high of 10,113 tonnes.
Gold’s largest ETF in contrast – the SPDR Gold Trust (NYSEArca:GLD) – has shrunk by 2.9% since gold prices last stood at Monday’s benchmark level of $1262.
Needing fewer than 801 tonnes, the GLD is now the smallest since August last year. 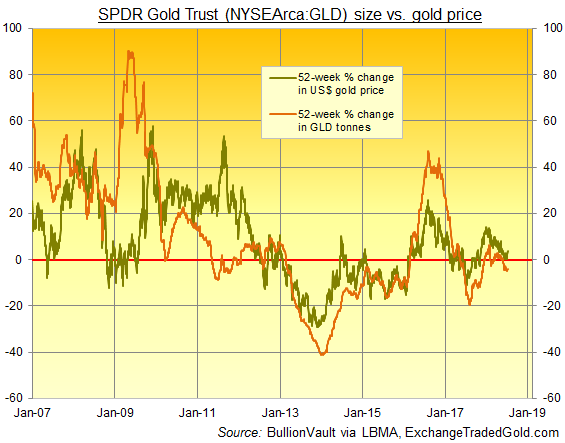 Shanghai gold prices today held firm against the Yuan, edging their premium above comparable London quotes to $4.65 per ounce – almost twice Monday’s 10-month low.
“Interest out of China kept price action buoyant for the majority of the Asian session,” says Tuesday’s Asian trading note from Swiss refiners and finance group MKS Pamp, “bidding the metal to a session high of $1260.10 before offers capped any further top-side gains.”
Turning to platinum, the latest US derivatives market data “shows platinum positioning [among all speculative traders] has turned net short for the first time since November 2001,” MKS goes on, “with gross shorts [ie, bearish bets] at an all-time high.
“This surely opens up room for a short covering rally should the metal remain robust. However, with global auto-demand for diesel cars sliding, the metal is unlikely to find support from this avenue.”
Platinum prices slipped below last week’s finish in London on Tuesday morning, edging back to $838 and holding a near-record discount to gold prices of $410 per ounce.
Two-fifths of global platinum demand each year comes for auto-catalysts to cut harmful emissions from diesel-engine vehicles.
The UK Government yesterday launched its new ‘Road to Zero’ plan, targeting 50% of all new car sales “to be ultra low emission by 2030” but stopping short of banning diesel or petrol engines in favor of allowing hybrid electric vehicles.
Also announcing a £400 million Charging Infrastructure Investment Fund ($520m) the Government said it will “push” for EV charging points to be installed in newly-built homes and street-light lampposts.
Auto giant Nissan yesterday admitted cheating emissions test at factories in its home nation of Japan, calling the findings of an internal report “regretful”.
Oil prices today rose near June’s 3.5-year highs for European benchmark Brent crude, touching $79 per barrel.
Unless Saudi Arabia can plug the gap in global oil supply set to result from the US block on exports from Iran in November, crude prices could rise another $50 per barrel according to a note from Bank of America-Merrill Lynch today.
“[But] in this game of chicken, we expect someone will blink before that happens.”
Base metal prices meantime fell hard on Tuesday, sinking near last week’s multi-month lows on what analysts called fears over the hit to global demand and economic growth from the US-led trade tariffs.