GOLD MINING stocks slipped Tuesday morning in London and bullion dropped to 3-session lows beneath $1333 per ounce as media pundits declared Hillary Clinton the winner of last night’s US presidential debate with Donald Trump.
Gold prices in China – the world’s No.1 gold mining, importing and consumer market – held firm overnight, fixing at the Shanghai Gold Exchange little changed from before the weekend, but edging down to a $2.85 per ounce premium above comparable Dollar quotes for metal settled in London.
“To keep the gold industry supplied we need to discover 90 million ounces a year,” said gold mining CEO Mark Bristow of Randgold Resources (LON:RRS) to journalists in Johannesberg yesterday, “[but] we are only discovering 10 million to 15 million ounces a year.
“We either have to discover more quality ounces or reduce the life of mines.” 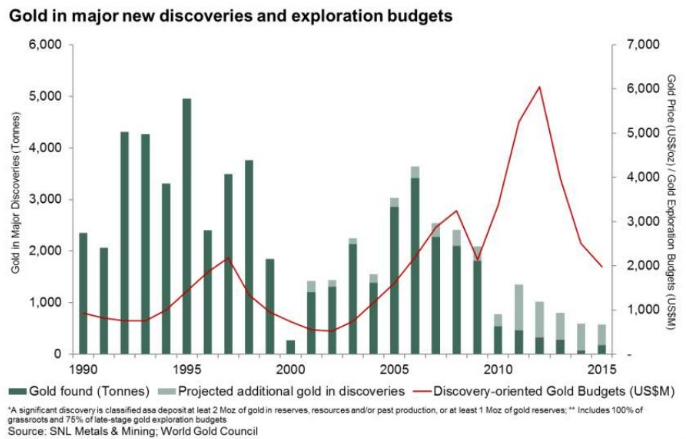 Delegates to the mining-focused Denver Gold Forum last week agreed that the industry is looking for “organic growth”, rather than repeating the mergers and acquisitions boom of the bull market ending 2011.
“That was a failed experiment,” news-wire Reuters quotes Kelvin Dushnisky, president of world No.1 gold mining firm Barrick (NYSE:ABX), saying the miner wants “value over volume” after the huge debts saw big write-downs as last decade’s M&A boom met the gold price’s steep fall from 2012-2015.
M&A deals have slowed hard in 2016 as gold mining stocks have soared in price, rallying 190% from January’s near-record lows to July’s 3-year high, but remaining well over 50% below the sector’s 2011 peak on the PHLX Gold/Silver index (INDEXNASDAQ:XAU).
The sector has retreated 15% on the XAU index as gold bullion has slipped 3% from the post-Brexit high of $1375 per ounce.
Work at Barrick’s Veladero site in Argentina – its 3rd largest producing project – has meantime been suspended this month following a chemicals spill.
A similar spill last year saw Veladero “blockaded by locals” reports long-time analyst Lawrie Williams.
Explaining why Randgold walked away from a joint-venture with AngloGold Ashanti (JSE:ANG) to develop the Obuasi project just 3 months after it was first announced, “We were very concerned about illegal mining and the lack of government support to deal with [it],” said CEO Bristow on Monday.
“We have made many attempts to invest in Ghana, but we were rattled by the political interference. The social risks was enormous.”
Last December’s decision showed how “Randgold remains financially disciplined,” said analysts at South African-based investment bank Investec, “but a negative is that medium-term growth options remain lacking.”