GOLD PRICES slipped on Thursday in London, retreating further from yesterday’s 2.5-month high against the Dollar after the US Federal Reserve forecast stronger interest-rate rises ahead and US President Donald Trump dialled down his threat to hit Russia’s ally Syria with airstrikes.
“Never said when an attack on Syria would take place. Could be very soon or not so soon at all!” Trump tweeted after saying Wednesday that Russia should “get ready” to see US missiles hit the forces of Bashar al-Assad, accused of attacking civilians with chemical weapons last weekend.
European stock markets rallied after Wall Street and Asia had fallen once more, while bond yields held little changed – and the Dollar fell back towards its lowest Chinese Yuan value of 2018 to date – despite notes from the Fed’s latest policy meeting saying that strong growth and rising inflation will lead to a faster pace of US interest-rate rises.
Looking at the gold price spike from Wednesday, “A flight to safety has been fuelled by US sanctions on Russia as well as deepening trade tension,” reckons Suki Cooper, head of precious metals research at London bullion market-making bank Standard Chartered.
“Gold is benefiting from the risk-off sentiment,” agrees analyst Simona Gambarini at consultancy Capital Economics.
“People are trying to hedge against worst-case scenarios.”
But gold’s sharpest gains so far this week have in fact come against the ‘safe haven’ currencies of Japan and Switzerland, with the metal rising 1.2% against the Yen and 1.4% against the Swiss Franc.
As for demand, last night’s finish in New York saw zero change for this week so far in the size of the SPDR Gold Trust (NYSEArca:GLD) – the world’s largest gold-backed exchange traded fund – with its shares in issue needing 860 tonnes of backing. 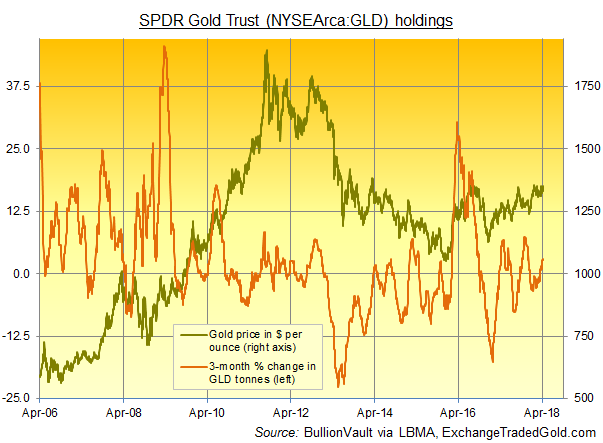 Setting a new record on Monday for shares outstanding, Germany’s largest gold ETF – the Xetra-Gold trust fund product – ended Wednesday unchanged in size.
Data from Bloomberg show the Xetra-Gold trust fund product swelling by almost one-half in 2016, and expanding by a further 14% over the following 15 months.
Wednesday’s half-per-cent rise in Dollar silver prices also left the largest silver-backed ETF unchanged in size, with the shares outstanding in the iShares Silver Trust (NYSEArca:SLV) still needing 9,959 tonnes of bullion to back their value.
“All participants agreed that the outlook for the economy had strengthened” and “all participants expected inflation on a 12-month basis to move up in coming months”, the US Fed meeting minutes showed Wednesday.
“With regard to the medium-term outlook…all participants saw some further firming of the stance of monetary policy as likely to be warranted.”
“Once the FOMC minutes were released [gold] was hammered,” says a trading note from Swiss refiners and finance group MKS Pamp.
Touching $1365 on Wednesday for only the second time since the UK’s shock Brexit referendum result of mid-2016, the gold price in Dollars traded over $20 lower per ounce by mid-morning in London on Thursday, cutting its gain for the week so far to 0.9%.
“Silver also propelled higher [on Weds] up to a peak of $16.8875,” says MKS, “but closed lower…following the Fed’s hawkish press release.”
Silver held firmer than gold prices Thursday morning, trading at $16.61 per ounce for a 1.4% Dollar-price gain from last Friday’s finish after touching an 8-week high before the Fed minutes yesterday.
Platinum prices meantime fell back to $925 after touching a 1-week high yesterday.
Palladium in contrast held almost 6.5% higher from last weekend as new US sanctions against Russian banks, companies and wealthy individuals over the Kremlin’s alleged toxic nerve agent attack on a former spy in Britain threatens to block supplies from the metal’s No.1 miner nation.