GOLD PRICES rose against all major currencies ahead of the Federal Reserve’s much-expected hike to Dollar interest rates on Wednesday, regaining last week’s $10 loss to trade above $1322 per ounce for US investors.
Silver regained half of last week’s 1.5% loss to reach $16.45 as the broader commodity markets also rose, as did longer-term US Treasury bond yields, taking the 10-year rate up to 2.90%, just 5 basis points beneath mid-February’s 4-year high.
European government bond yields rose more steeply on the day but held further beneath their recent highs, with UK and German 10-year rates touching 1.55% and 0.60% respectively.
“A [Fed] rate hike is largely priced in,” says Swiss bank and London bullion clearing provider UBS of current gold prices, “[so] there’s scope for a short-term relief rally in gold, which typically occurs after a Fed rate hike.
“But a hawkish tone could limit those prospects.”
“Jerome Powell’s first press conference post-FOMC as Fed chairman will be even more closely scrutinized than the rate announcement itself,” agrees a note from London brokerage Marex Spectron.
For gold prices, “Expect thin and nervous markets ahead of this, followed by some pretty silly moves.”
“While there can be no doubt about a 25-basis point rate hike,” says French investment and bullion bank Natixis, “the question is whether the [Fed’s forecasting] dots will be revised upward and will point to 4 rate hikes this year compared to 3 currently.”
Latest data from derivatives exchange the CME Group say that speculative betting on Fed funds futures now puts the odds of a rate-rise to 1.75% at today’s meeting at 97.2%, up from 81.7% this time last month.
Another rate hike in June is now seen as 84.4% likely (up from 58.5% a month ago) while September’s meeting will take rates up again according to 52.2% of current betting (jumping from 37.3% a month ago).
A fourth 2018 hike in December looks less certain however, with only 31.4% of betting through the CME predicting that Fed rates will end the year at 2.50%.
Even so, that likelihood has leapt from 21.7% this time last month. 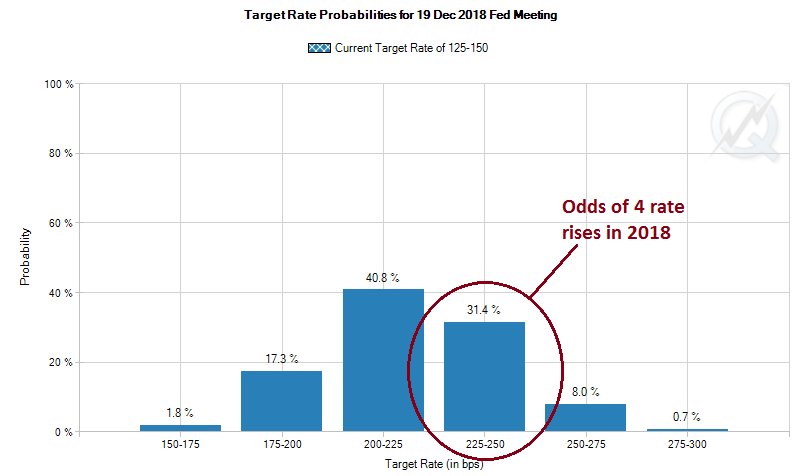 Longer-term, “Expectations are for gold to remain within the established range, struggling to break the highs seen in the past couple of years,” UBS’ bullion analysts go on, relaying sentiment from speaking to Swiss and New York investor clients.
“Most of those we spoke with give gold credit for its resilience to higher rates, yet also recognise that much of this has likely been due to US Dollar weakness.
“A few see gold pulling back below $1300, but a sharp and sizeable collapse in prices was not deemed likely.”
“Physical interest out of China continues to keep price action buoyant,” says a trading note from Swiss refiners MKS Pamp.
“As we head toward Wednesday’s FOMC rate decision, bullion has managed to edge away from the early March low of $1303 and the 100-[day moving average] of $1305.
“Both continue to act as strong supportive levels should the greenback see interest” and the Dollar rise around the Fed’s decision.
“Gold seems to have established a floor at multi-month graphical levels of $1302/1300, also the 100-day Moving Average,” agrees the technical analysis team at French investment and bullion market-making bank Societe Generale.
Gold’s 100-day moving average actually comes nearer $1305 says bullion clearing bank Scotia Mocatta’s New York office, adding that “momentum indicators are bearish.”