GOLD ETF and bullion prices neared their highest Friday close in four weeks in London today, with wholesale gold rising above $1273 per ounce as world stock markets fell on what news-wires called “frayed investment nerves” ahead of next week’s Federal Reserve decision on Dollar interest rates.
Ten-year US bond yields fell towards 3.5-year lows at 1.65%, while benchmark German Bund yields ticked down to a new record low of 0.02% per annum.
Industrial and energy commodity prices fell up to 1%, but silver ETF and investment prices pushed upwards with gold, reaching near 4-week highs at $17.36 per ounce.
“The recent run of weak employment data and below-target inflation may lead [the Fed] to take an even more dovish stance on the rate outlook,” says analyst Jonathan Butler at Japanese conglomerate Mitsubishi.
“Such developments would be gold supportive [but] the market is getting a little one sided again, [so] any perceived hawkish pronouncements could lead to profit taking.”
Money managers and other investors “ploughed into gold exposed exchange traded funds last month,” says the Financial Times, quoting asset-management giant Blackrock, with $5.4 billion going into gold ETFs in May as investors pulled $3.7bn out of stock-market tracker funds.
The world’s largest gold-backed exchange-traded fund vehicle, the SPDR Gold Trust (NYSEArca:GLD), yesterday needed another 7 tonnes of bullion to back its rising number of shares in issues, taking the total to a fresh 32-month high at 887 tonnes.
That’s still one-third smaller than the GLD’s end-2012 record holdings.
The largest silver-backed ETF, the iShares Silver Trust (NYSEArca:SLV), has meantime swollen by almost 1% so far in June.
Silver-backed trust fund holdings worldwide are now within 1% of mid-2014’s record. 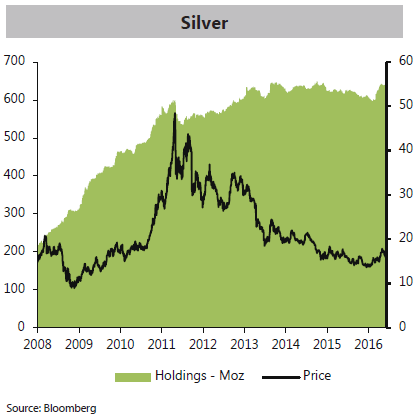 In key consumer markets, meantime, Shanghai’s wholesale gold market was closed Friday for the second day of China’s Dragon Boat festival holidays.
Due to re-open on Monday, it last saw gold prices 1.5% lower than today in US Dollar terms.
In contrast to Western ETFs and investment, gold demand in India – the No.2 consumer market – this week drove dealer discounts down as deep as $46 per ounce from international spot quotes, according to a Reuters report, sharply worse than last week’s $14 as rising prices met a lack of festive or wedding occasions on the Hindu calendar.
“Consumers are very price sensitive…postponing purchases due to the recent rally in prices,” the news-wire quotes Harshad Ajmera at bullion wholesaler JJ Gold House in Kolkata.
“Traditionally demand remains weak in June but we never witnessed such kind of a lull in the market.”
India’s weak gold demand is also reflected in much lower smuggling, says The Hindu newspaper, with seizures at Kerala state’s Cochin airport falling by two-thirds in recent months from the start of 2016.
“‘The intake by jewellers has come down to such a pass that there is hardly any demand for the yellow metal, both legal and illegal,” the paper quotes Cochin Customs commissioner, K.N.Raghavan.”
Last week’s decision by the Indian government to reverse a proposed 1% tax collection at source on cash purchases of jewelry “brings some relief to the industry,” says the latest weekly note from specialist analysts Metals Focus.
While the additional 1% excise duty now levied on jewelry manufacturers remains, despite protests from the industry, “and arguably has affected the industry the most…the forecast of an above normal monsoon, along with the impact of salary [rises] which will come into effect in July…should bode well for gold consumption in India later in the year,” the consultancy says.