GOLD ETF trust fund trading saw bullion prices rise within $5 per ounce of last September’s 13-month high on Wednesday in Londonas the US Dollar fell to new 3-year lows on the FX market and Japan led a retreat in world stock markets from record-high levels.
As gold prices moved above $1352 per ounce in wholesale dealing, major government bond prices fell again, driving the yield offered to investors higher once more.
That extended the break with gold’s typical negative link with US interest rates.
Non-Dollar investors however saw gold bullion hold unchanged overall, with the Euro price recovering to a gain of 0.6% for 2018 to date at €1093 per ounce.
The UK gold price in Pounds per ounce flirted with its lowest level in a month, dipping again beneath £953 as Sterling rose following news of the lowest UK jobless rate in four decades but continued negative growth in average earnings against inflation in the cost of living.
Investor demand for gold-backed exchange-traded trust funds saw ETF holdings expand “to 2,250 tons on Monday,” says Bloomberg, citing its own data, “the highest since May 2013.”
Broader data from the mining-backed World Gold Council however, when adjusted by ETF providers’ own updates, puts the total above 2,375 tonnes as at end-Tuesday – the highest since 2013’s gold price crash began with a surge of ETF liquidation that April.
If gold priced in Dollars ends January at this level, it would mark the highest monthly close since August 2013. 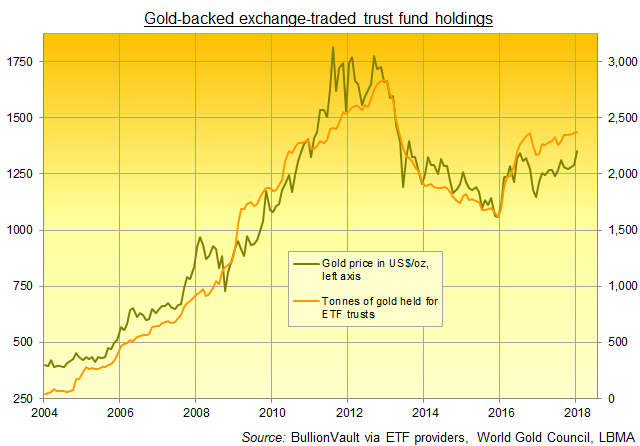 “Strongly performing equities and other risk assets tends to be negative for gold,” says the latest weekly note from precious metals strategist Jonathan Butler at Japanese conglomerate Mitsubishi.
“However, increasing evidence of hedging of riskier equity and corporate bond trades in gold helps explain why bullion is continuing to hold its own in this ostensibly challenging environment.”
“Not only do we believe the price risks for gold are skewed to the upside in 2018,” says analyst Suki Cooper at Asia-focused investment and London bullion market-making bank Standard Chartered, “we think gold prices could test five-year highs amid continued geopolitical and political uncertainty.”
“The scope for rising inflation, the interest rate-hiking trajectory nearing the end of its cycle, and a stock-market correction could reignite interest in gold.”
Silver also popped higher on Wednesday, tracking but still lagging gold prices with a 1.9% rise for this week so far at $17.34 per ounce – the highest level since last Tuesday.
Platinum prices meantime rose within $1 of its highest price since March 2017, gaining 16.7% from last month’s near 2-year lows against the Dollar to touch $1021 per ounce.
For Euro investors platinum has risen 10.8% since mid-December’s near 9-year low.