GOLD FELL but silver rose again on Monday in London as European stock markets failed to follow Asian shares higher to new 1-year highs, write Steffen Grosshauser and Adrian Ash at BullionVault.
Gold prices traded between $1346 and $1351 per ounce, holding below the $1355 hit last Friday – the highest level since 12 July.
Silver meantime rise 1% and touched a 3-week high of $20.65 per ounce on Monday, and the metal’s bullish trend will remain intact as “long as it closes above $19.94” said technical analysis from Canada-based investment and bullion bank Scotia in their daily update last Friday. 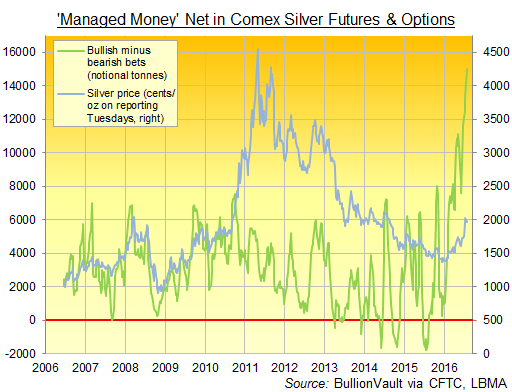 Ahead of last week’s US Fed decision on Dollar interest rates, hedge funds and other leveraged speculators under the ‘Managed Money’ category grew their net bullish betting on Comex silver futures and options contracts to the 6th new all-time record in a row, new data showed after Friday’s close.
The Dollar steadied today after last week’s drop to 3-week lows followed the US Commerce Department’s announcement of much weaker than expected GDP growth in the second quarter, reported at 1.2% against analysts’ 2.6% forecasts.
Friday this week will bring US jobs data for July.
With UK business activity shrinking at the fastest pace since its last recession seven years ago, the Bank of England is expected to cut borrowing costs to a new record low of 0.25% when it announces policy on Thursday.
“Just at a time when evidence was building that the US economy was in a position for the Fed to again contemplate rate hikes, some weak domestic data or a global event quite quickly scuttle those plans,” said commodities researchers at Australia’s ANZ Bank on Monday morning.
“The Fed will likely abstain from doing anything in September or October as that will be too early to make a move,” agrees US brokerage INTL FCStone’s analyst Edward Meir in a note.
The Fed’s dovish posture “should weaken the Dollar, pushing gold to test July highs of $1374 levels, with an outside chance of getting to $1400,” Meir adds.
Manufacturing survey data today said China’s factory activity held flat overall in July, while Eurozone activity grew but the UK’s output fell more in July than forecast after the Brexit referendum result, suffering its biggest drop in more than three years.
Markit’s Purchasing Managers’ Index (PMI) declined to 48.2, below the 50 mark which separates expansion from contraction.
The British Pound extended its decline against the Dollar, slipping further to $1.32 as the Euro also eased back.
That buoyed the gold price in Sterling near 3-week highs at £1025 per ounce, while gold priced in Euros held flat from last week’s finish at €1208.
Silver rose around 1% against both currencies, and eased back from an early 1.6% gain versus the Dollar to the highest price since 11 July at $20.65 per ounce.