GOLD BULLION held in a tight range Wednesday morning in London, trading $10 below the previous 3 sessions’ floor of $1335 per ounce as European stock markets rose and government bonds eased back ahead of a raft of central banker speeches, including Fed chair Janet Yellen testifying to US lawmakers on financial regulation.
European Central Bank chief Mario Draghi meets later today with German politicians, with allies of Berlin chancellor Merkel set to demand “clear answers on what monetary policy has achieved, apart from an expansion of joint liability in the Eurozone.”
Besides Yellen’s appearance on Capitol Hill, four other members of the FOMC are due to speak.
“It is getting harder and harder to justify [US] interest rates being so incredibly low given where the economy is and where it is going,” said San Francisco Federal Reserve Bank president John Williams in an interview Tuesday.
A non-voting member of the FOMC until 2017, “I would support an interest rate increase,” he said.
“[Gold price] momentum has declined,” says a technical analysis from market-maker Scotiabank’s Russell Browne, now “neutral as long as gold closes below $1335.”
That level – formerly offering “support” to gold bullion after last Wednesday’s no-change decision from the Fed – will now act as “resistance” says Scotia.
“Comments from the [Fed] and the central bank’s own forecasts effectively put markets on notice that a December rate hike is likely,” says the latest weekly analysis from Jonathan Butler at Japanese conglomerate Mitsubishi.
“[That] could weigh on bullion in the weeks ahead [but] gold will also be sensitive to economic and political uncertainty leading up to the US presidential election…and can be expected to live up to its traditional role as a risk hedge.”
“We have a lot of political risk in the market right now,” US investment bank and London bullion market maker Goldman Sachs’ chief commodity analyst told CNBC overnight, “so gold has a strategic purpose.
“Gold is a hedge against politicians.”
“Gold will remain one of the major beneficiaries in the current backdrop,” agrees Societe Generale’s Robin Bhar, contrasting precious metals with base metals – now prey to China’s slowing economy – in his latest outlook for the French investment and bullion market-making bank.
“Heightened volatility and lingering uncertainty will keep investors’ risk appetite in check…[but] the elevated level of long speculative positions indicates that gold remains in a highly vulnerable state.” 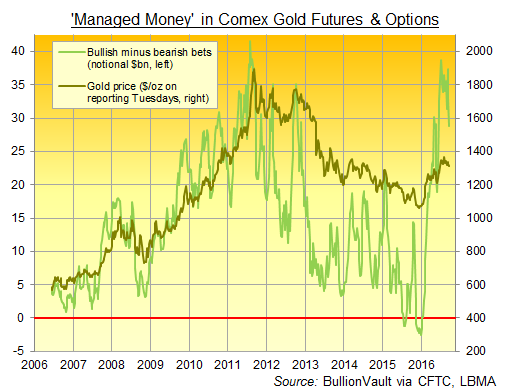 Latest data say speculative interest in Comex gold futures and options fell hard before the Fed’s non-decision last Wednesday, taking the drop from July’s near-record high to more than 25% net of bearish bets amongst that group.
By value however, net speculative long positions remained twice as large as the last decade’s average.
“Even slight improvement in investors’ enthusiasm [for stocks and higher-risk bonds] could trigger massive long liquidation and reverse gold’s impressive gains,” says Bhar.
Commodity prices steadied on Wednesday, with US crude oil above $45 per barrel as producer cartel Opec’s meeting in Algiers to discuss an output cap entered its third day.
Silver bullion steadied at $19.15 per ounce, having fallen harder than gold on Tuesday, dropping to 1-week lows some 3.5% below last Friday’s finish.