GOLD BULLION dropped $10 per ounce from yesterday’s 2-week highs on Friday in London, falling to $1333 per ounce before turning higher as global stock markets fell but bond prices rose following this week’s “no change” decision on US rates from the Federal Reserve and the Bank of Japan’s switch to unlimited QE monetary stimulus.
Silver cut its weekly gain to 5.4% after nearing 1-month highs above $20 per ounce on Thursday.
Adding 1.8% from last Friday’s finish, gold bullion held bang in the middle of its post-Brexit range between $1302 and $1375 as New York trading began.
“Central banks have been doing their best to pep up [global economic] demand,” says The Economist magazine’s lead editorial.
“Now they need help…the most urgent priority is to enlist fiscal policy. The main tool for fighting recessions has to shift from central banks to governments.”
“Austerity is causing too much pain,” wrote veteran financial journalist and columnist Anthony Hilton in last night’s London Evening Standard.
“The only way we…the US, as well as Europe, can hope to revive demand and stimulate growth is for the Government to show leadership in building more roads, houses, airports and rolling out high- speed broadband – investing in infrastructure – even if it has to borrow or print the money to do so.”
“If whoever wins the [US] presidency focuses more on fiscal policy,” says Laurence Fink, CEO of giant asset-management group Blackrock – forecasting a possible 15% drop in stock values without it – “you could find ways of re-igniting the economic conditions of the world, which will help the capital markets.”
Looking at US Dollar gold prices, “The rally has packed a lot of punch in the last couple of days, and the market may need to consolidate,” say a note from investment and London bullion clearing bank HSBC’s precious metals team.
But HSBC sees “no compelling reason to change” its outlook for no further Fed rate hikes this year, with only 1 rise in 2017.
“This scenario gives gold more room to the upside.”
Touching $1343 per ounce at Thursday’s high, gold was “testing a downward trend line from July forming on the daily chart” says technical analysis from London bullion market maker and clearing bank ICBC Standard Bank. 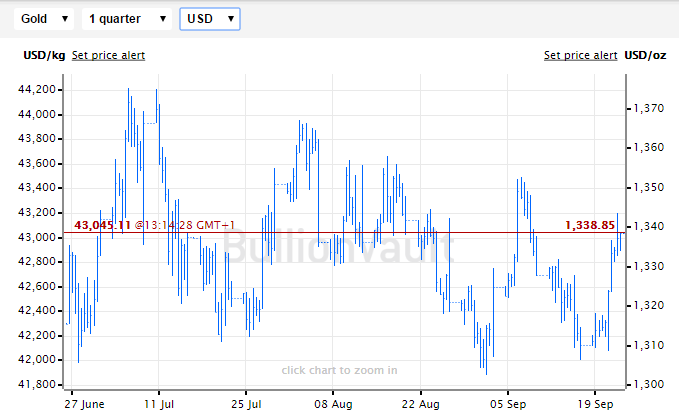 Gold bullion meantime headed for a 1.6% weekly rise against the Euro, a 2.4% rise versus the Pound Sterling, and a 1% gain in Canadian Dollar and Swiss Franc terms.
The Japanese Yen however held the metal just 0.7% higher from last Friday’s finish, as the currency continued to defy the Bank of Japan’s active new inflation policy – announced Wednesday – at an exchange rate of fewer than ¥101 per US Dollar.
Vowing to keep creating new money to buy government bonds and other assets without limit, the BoJ already owns one-third of Tokyo’s record government debt – now on track to reach 250% of the country’s economic output in 2015.