GOLD BULLION slipped through what several analysts and traders called key support at $1243 per ounce in London on Tuesday morning, extending its drop from early May’s 15-month high to almost 5% as world stockmarkets rose.
The Dollar rose to 2-month highs versus the single Euro currency as the Eurozone’s 3rd wealthiest nation, Austria, confirmed the narrow election victory of left-wing Green Party-backed candidate Alexander Van der Bellen as president over right-wing Freedom Party chief Norbert Hofer.
That curbed the drop in Euro gold bullion prices to 2-week lows at €1109 per ounce.
French prime minister Manuel Valls, visiting Israel, was one of several senior Eurozone politicians to express what he called his “relief at seeing Austrians reject extremism and populism.”
New data in the UK – where Bank of England governor Mark Carney today clashed with Eurosceptic politician Jacob Rees-Mogg over his bank’s stated view of the economic risks should Britain vote to leave the European Union next month – meantime showed government borrowing falling last month from April 2015, but rising above analyst forecasts.
Gold bullion priced in Sterling slipped below £850 per ounce in wholesale London trade for only the 4th time since rising through what was then a 13-month high in February.
“Gold is now probing a multi-year descending trend near $1243,” says technical analysis of weekly Dollar-price charts from French investment and bullion bank Societe Generale, “which also corresponds with the 23.6% retracement of the recent recovery” – a so-called Fibonacci level some analysts watch.
“If we drop down to daily chart, gold is now close to the median of an upward channel drawn since February [also] at $1243.
“A break below…will mean possibility of a deeper down move…with next support at March lows of $1206/$1190.”
“There appears to be good demand for gold at $1243-44,” says a note from the Australian offices of Swiss refiners MKS, commenting on physical trading in Asia overnight.
“It will be interesting to see whether this level will prove to be a triple bottom. [But] if [gold] does break through convincingly, there could be a fresh wave of liquidation.”
There was no liquidation in gold Monday, but further buying in the SPDR Gold Trust (NYSEArca:GLD) instead, with the world’s largest exchange-traded gold-backed trust fund needing to add gold to its holdings 14 times in the last 20 trading days.
That pattern has been seen only twice since the GLD launched in November 2004, first as global stockmarkets hit 13-year lows following the collapse of Lehman Brothers in late-2008, and then as the Greek debt crisis broke in summer 2010.
Latest data for US gold futures and options meantime show speculative “non-commercial” traders retreating only a little last week from the largest bullish position, net of that group’s bearish bets, on record.
In Dollar terms, the notional value of that “net spec long” position was last this great in late 2012, when gold prices traded at $1750 per ounce. 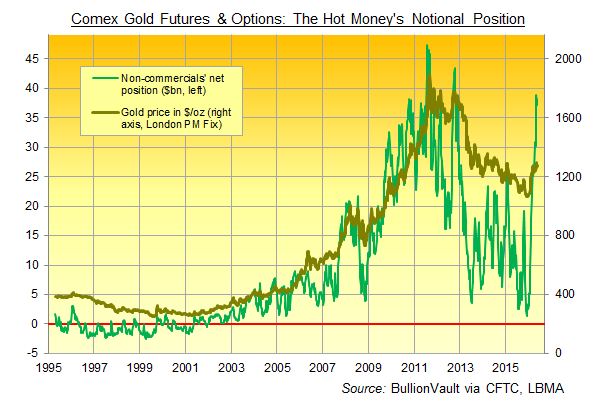 “Once again we made lower highs and lower lows,” says a technical note on Monday’s trading action from the New York bullion desk of Canada’s Scotiabank.
“[That] has now occurred over the last 5 trading days” – something which will mark gold’s longest run of daily drops since November’s approach of new 6-year lows if repeated Tuesday, says the Reuters news and data agency.