GOLD BULLION priced in Dollars retreated on Wednesday from its second attempt in 3 days to break the 6-year downtrend starting at 2011’s record peak, as world stock markets and commodities steadied after yesterday’s drop amid a higher outlook for world economic growth from the IMF.
Analysts at Germany’s Commerzbank last week called the $1291 level, where gold’s 2011 downtrend now comes in, “MAJOR resistance”.
Falling back $8 per ounce to $1284, gold bullion fell harder in other currencies’ terms as the US Dollar slipped on the FX market.
London’s FTSE-100 bucked the rally in Western stock markets and fell again as the UK Parliament voted on Prime Minister May’s call for a snap election in June – widely seen as a vote on her approach to Brexit – making it the worst-performing major index of the last month outside Japan.
“Momentum in the global economy has been building since the middle of last year,” says the Washington-based International Monetary Fund’s latest forecast today, raising its 2017 global GDP prediction to 3.5% growth.
All regions are then forecast to see stronger growth again in 2018 except the Eurozone, UK and Japan.
The single Euro currency today touched a new April high near $1.0737, knocking the price of gold bullion for German, French and Italian back below €1200 per ounce – a 7-month high when broken last week.
Forecast meantime to follow last year’s 18% drop in GDP with a 7.4% drop in 2017, Venezuela must not be allowed to swap its remaining 187 tonnes of gold for cash in a deal with Wall Street banks, says a letter to several top lenders from the Latin American country’s National Assembly President Julio Borges.
With inflation hitting 800% this New Year and daily protests against the elected Socialist government of Victor Maduro now turning violent, “I have the obligation to warn you that by supporting…a gold swap you would be taking actions favoring a government that’s been recognized as dictatorial by the international community,” Borges tells Goldman Sachs, Citi, and other leading US investment banks. 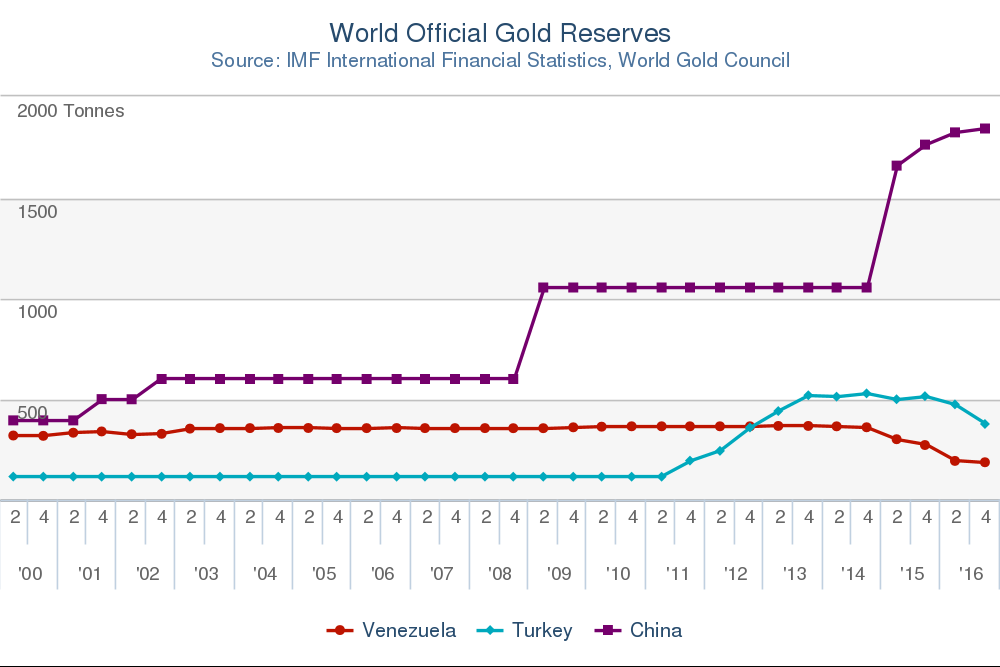 Now with around $7.7 billion of bullion – moved in 2011 from London to Caracas by late Socialist leader Hugo Chavez amid threats of international sanctions against his expropriation of foreign-owned assets – Venezuela currently holds just $10.3bn in total central-bank FX reserves, a 15-year low according to Bloomberg.
The GDP of world No.6 gold consuming nation Turkey will expand 2.5% this year on the IMF’s new forecasts, slowing from 2016 but then expanding 3.3% in 2018.
Turkey’s outlook is “clouded by heightened political uncertainty,” the IMF says, plus “security concerns and the rising burden of foreign-exchange-denominated debt caused by the Lira depreciation.”
Dozens of opposition protestors in Istanbul and were arrested overnight, the New York Times reports, as the government of President Recep Tayyip Erdogan moves to squash dissent over the weekend’s controversial referendum, officially showing 51.4% to 48.6% in favor of giving the President sweeping new powers after last year’s failed coup.
Prime Minister Binali Yıldırım today called opposition party the CHP’s refusal to accept the result “illegitimate”.
World No.1 gold mining, consumer and importing nation China will meantime expand its GDP by 6.6% this year, the IMF’s new report says, higher from October’s estimate of 6.2% for 2017 growth reflecting “stronger-than-expected momentum…[and] continued policy support in the form of strong credit growth and reliance on public investment” by the Communist Party dictatorship.
Shanghai gold prices fixed at 1-week lows on Wednesday, slipping 1% from Monday’s new 5-month high in Yuan terms.
That cut the premium for gold bullion inside China to $6 per ounce above comparable London quotes, the lowest in 6 weeks and $3 below the average incentive to new Chinese imports since the state-backed Shanghai Gold Exchange launched its twice-daily benchmark price 12 months ago today.