GOLD BULLION dropped through $1250 per ounce for the first time since last week’s 4-month low in London trade Friday lunchtime as the Dollar rose again following better-than-expected US retail sales data.
China’s key gold price had earlier held firm, trading $5 above London quotes for the fourth time since the market returned from the autumn Golden Week vacation.
World stock markets had earlier risen sharply but major government bond prices slipped, nudging the yield offered to new buyers higher again
Ten-year UK Gilt yields meantime jumped to 1.15% as prices fell to 5-month lows and the British Pound fell towards its lowest weekly close since April 1985.
New prime minister Theresa May today met the head of Japanese automaker Nissan over fears it may shut production in north-east England – costing 7,000 jobs – as a result of the UK’s Brexit decision to quit the European Union.
Gold bullion held at £1020 per ounce for UK investors, gaining 1% for the week.
Priced in US Dollars, gold however neared its lowest Friday finish since early June below $1250 per ounce. 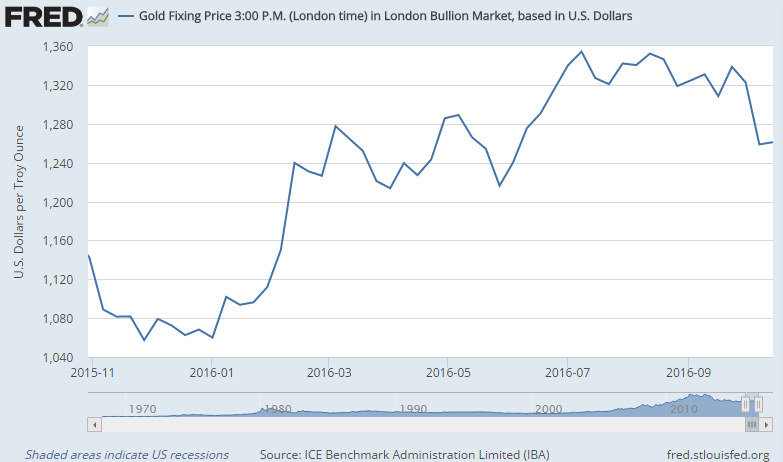 “Depending on the outcome of the [US presidential] election…if there are [new] polices that would have distortive effects [then] we’ll have to respond,” said non-voting Federal Reserve member Patrick Harker of the Philly Fed on Thursday.
“I don’t know which way that will go.”
Betting in the US interest-rate market currently puts the chance of a November hike below 1-in-11, jumping to 3-in-5 for December but still forecasting a 90% chance that the Fed Funds rate will remain below 1.00% this time next year.
“A slow moving Fed and a moderate pickup in inflation,” reckons a new note from Swiss bank UBS’s wealth management division, “should push real interest rates deeper into negative territory in 2017.
“Historically, this has acted as a powerful driver of higher gold prices.”
“I’m not a gold bug,” says former hedge-fund manager and investment news entrepreneur Raoul Pal, “[but] as we get to negative interest rates, gold is a good place to park your cash.”
“This is the currency I would choose now.”
Short term however, “[technical] indicators remain bearish and I am biased to the downside,” says the latest chart analysis from bullion market maker ScotiaBank, “as long as gold closes below $1267.75.”
“The market needs to break meaningfully past $1303, [the] early-September low, to suggest potential,” says an Elliott Wave analysis from US investment bank and bullion market maker Goldman Sachs.
“The next downside level to watch is 38.2% retrace [of the 2016 upmove] at $1250. A break lower will open up risks to 50% retrace [around] $1200.”
Shanghai’s exchange-traded gold market again saw moderate volumes overnight, but the city’s benchmark auction fixed for the fourth time this week with a premium to London prices above $5 per ounce – twice the typical incentive for bullion imports to the world’s No.1 consumer nation.
“A healthy premium [in] China gold prices is encouraging physical purchases and is evidence of good demand,” says London bullion clearing bank HSBC’s analyst James Steel.
But “the Chinese economy has become increasingly reliant on credit to sustain its rapid expansion,” warns a new note from weekly magazine The Economist‘s Intelligence Unit, whose south-east Asia director Andrew Staples will chair a panel debate on “potential pathways for precious metals” at next week’s LBMA conference for the global bullion industry, held this year in Singapore.
“Economic growth will slow from 6% in 2017 to 4.2% in 2018, a deceleration that will be widely perceived as a hard landing…A painful readjustment will come sooner rather than later.”
Pre-Diwali demand in India – the former world No.1 private gold buyer – has meantime seen a “pick up” says the Reuters news-wire, with this year’s discount to London prices falling to a 9-month low as jewellers report stronger consumer interest.