GOLD BULLION rose in a tight trading range Wednesday in London, regaining last week’s close of $1325 per ounce after new US data – released before today’s July interest-rate decision from the Federal Reserve – showed orders for fridges, washing machines and other durable goods sinking 4% in June, the worst drop in almost two years.
Major government debt yields fell as stockmarkets rose with bond prices and the Yen retreated from Tuesday’s spike after Japanese prime minister Abe announced a new stimulus package worth $265 billion.
Gold bullion also rose for Eurozone investors, also reclaiming last week’s finish at €1205 per ounce, but silver rose faster, breaking back above €18 per ounce and also jumping 1.1% against the Dollar to reach $19.89.
Silver’s largest bullion-backed exchange-traded fund, the iShares Silver Trust (NYSEArca:SLV) ended yesterday with its holdings unchanged at 10,842 tonnes, equal to one-third of last year’s total global demand.
But Tuesday saw the giant SPDR Gold Trust (NYSEArca:GLD) lose gold bullion for the third time in 4 sessions and the seventh time in the last 3 weeks – the most consistent run of net investor liquidation from the world’s largest such vehicle since mid-April.
The GLD has only shrunk on 27 out of 142 trading days (19%) so far in 2016, growing instead on 69 days (49%).
Across the previous 3 years, the GLD added metal on just 101 of a total 755 trading days (13%), shrinking 297 times (33%). 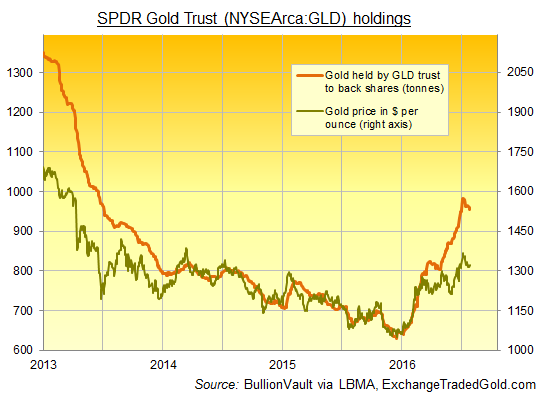 Exchange-traded gold trust demand outweighed buying from the world’s top two consumer markets of China and India in the first half of 2016, notes the Business Standard, summarizing yesterday’s new 2016 Gold Survey Update from specialist analysts Thomson Reuters GFMS.
India’s traditionally huge market has seen “crazy low” gold demand so far in 2016, industry executives agreed at a conference in Agra last weekend.
“China’s total gold demand remained in freefall in the second quarter,” says the latest GFMS report, thanks to a “cocktail of factors” including economic weakness, rising living costs, and worsening unemployment in the manufacturing sector all hitting discretionary spending.
China’s gold consumption fell almost 8% in the first half of 2016 compared to the same period last year, dropping below 529 tonnes according to the state-owned Shanghai Securities News, apparently citing data from the government-mandated China Gold Association.
That contrasts with a 12% rise in gold bullion imports through Hong Kong, showing that “gold demand in China has picked up again noticeably in the second quarter after getting off to a subdued start to the year,” says analysis from German financial services group Commerzbank.
Mining output from China – the world’s top producer since 2007 – held firm at 229 tonnes, Shanghai Securities News adds.
Gold prices in Shanghai today fixed unchanged from Tuesday afternoon, but cut their premium over comparable London quotes to $1.30 per ounce as the Yuan steadied on the currency market, gaining half-a-per-cent from mid-July’s new 5-year lows against the Dollar.
The British Pound meantime held flat – buoying gold bullion prices at last week’s finish of £1008 per ounce – despite UK economic output growing 0.6% in Q2 from the first 3 months of the year according to new data from the Office for National Statistics.
All that growth came in April, ahead of end-June’s Brexit result in the UK’s referendum on leaving the European Union, according to analysis from independent consultancy Capital Economics.
UK retail sales then fell at the fastest pace in more than 4 years in July, according to one business group’s latest survey.
“Orders placed on suppliers dropped at the quickest pace since March 2009” – the crash low in world stockmarkets after Lehman Brothers collapsed – the CBI’s new Distributive Trends Survey goes on.
The UK Government yesterday raised 50-year debt at a negative real yield of 1.3% per year on inflation-linked bonds.
“The debt issue was oversubscribed, attracting offers of £10.1bn,” says money manager site FundStrategy, “with 93% of buyers coming from the domestic UK market.”