GOLD BULLION set a new 2-month low against the US Dollar on Tuesday, falling to $1224 per ounce as European stock markets rose and bond yields ticked higher following the weekend’s election of centrist ex-investment banker Emmanuel Macron as President of France.
Silver fell harder, dropping to its lowest since the opening day of 2017 at $16.16 per ounce and dropping 13% from mid-April’s 5-month high.
Euro and British Pound prices for silver bullion have fallen harder still from mid-April as the US Dollar has weakened, dropping back to pre-Brexit referendum levels beneath €14.90 and £12.55 per ounce respectively.
Defeating nationalist anti-Euro candidate Marine Le Pen two-to-one, and vowing to boost France’s economy by reforming labor laws and jobless benefits, Macron will act slowly, taking an “incremental approach” according to analysts.
In Brussels meantime, European Commission chief Jean-Claude Juncker called last week’s reports of a fractious dinner with UK prime minister Theresa May over the issue of Brexit “a serious mistake,” but without taking responsibility for the leak.
Giant exchange-traded fund the SPDR Gold Trust (NYSEArca:GLD) ended Monday needing less than 852 tonnes of bullion backing, with a small drop equal to 0.1% of the ETF’s investor interest marking the first change in 8 trading days.
The ETF’s stock, like gold bullion priced in Dollars, has fallen by some 2.5% over that time. 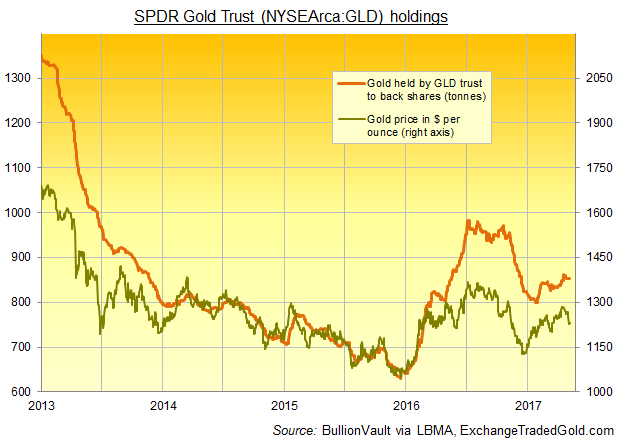 The number of ETF shares outstanding in the giant iShares Silver Trust (NYSEArca:SLV) has held 1% larger so far this month against a 5% drop in US Dollar silver bullion prices.
Bullion traded at the Shanghai Gold Exchange’s afternoon benchmarking held at 2-month lows against the Yuan, but offered a much smaller premium over comparable London quotes, down from $18 per ounce in mid-March to barely $10 per ounce today.
That incentive was still just above the SGE afternoon fix‘s average incentive to new imports since the Yuan benchmark price was launched in April last year.
“People are afraid of war, a falling Yuan and slumping property prices,” says a Shanghai gold retailer quoted by the Australian Financial Review today.
“Buying gold bars as an investment is a good way to guard against risk.”
“The introduction of property purchase restrictions in recent months has boosted demand for gold,” adds analyst Xue Na at Nanhua Futures.
“The stock market has also been sluggish,” says the China Gold Association’s vice-chair Zhang Yongtao, “prompting investors to buy gold, which is less volatile.”
Led by a 30% year-on-year rise in Chinese bullion demand, global sales of gold coins and small bars saw the strongest first-quarter since 2013 in January-to-March according to new data released last week by the mining-backed World Gold Council.
Silver bar and coin demand, in contrast, has fallen sharply, led by a one-third drop in private US bullion buying according to latest estimates from specialist analysts Metals Focus.