GOLD BULLION halved the week’s earlier 1.4% losses Friday in London, rising to $1327 per ounce as the rout in Germany financial giant Deutsche Bank’s shares worsened, global stock markets fell back with commodity prices, and China began its week-long National Day holidays.
Deutsche Bank’s stock was already 40% down for 2016 before the US Department of Justice recommended a $14 billion settlement in mid-September over the sale of mortgage-backed derivatives.
DBK has since dropped another 20% to near all-time record lows.
CEO John Cryan today told staff that DBK’s stock has become the target of “rumors” and “hefty speculation” by traders.
The government of Pakistan meantime said it “completely rejected” India’s claim of “surgical strikes” made Wednesday against terrorists across their joint border, while New Delhi said it has evacuated some 10,000 people living near the disputed Line of Control in Kashmir.
Thursday’s 1% drop in US stockmarkets was followed by a 1.5% drop in European shares, pulling them down to 2.5% losses for the month of September as Deutsche Bank led the drop.
Gold priced in Euros held 1.1% higher from end-August meantime, rising sharply as the single currency fell on the FX market and regaining three-quarters of this week’s earlier 1.7% drop towards its post-Brexit floor beneth €1170 per ounce.
Chinese gold bullion quotes ended September 0.7% higher for the month in Yuan terms, fixing at Friday afternoon’s Shanghai benchmark with a premium over equivalent Dollar quotes in London of more than $5 per ounce – over twice the typical incentive to importers.
Financial markets in the world’s No.1 gold consumer and No.2 economy will now stay closed until Monday 10 October for the Golden Week holidays, starting with tomorrow’s National Day.
The government-backed China Travel Academy estimates tourism spending will rise 14% to reach a new Golden Week record of $72 billion.
Spending some $18.5bn on jewelry, bars and coins between January and July, households across China, Hong Kong and Taiwan bought 1 in every 5 ounces of gold sold worldwide during the first half of this year, according to data compiled for the World Gold Council.
“There was some good buying from the Chinese ahead of the holidays,” Reuters quotes Hong Kong traders Lee Cheong Gold Dealers, “and we need to see if this holds next week.”
Gold bullion imports to China through Hong Kong – by far still the major point of entry according to a Chinese bank executive BullionVault spoke to this week – fell 45% in August from July, recording the lowest level since January according to analysts at Germany’s Commerzbank. 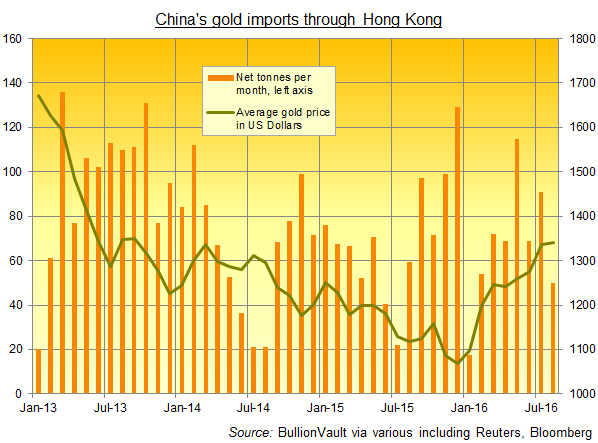 But “we don’t see this decline as particularly bearish,” says a note from Australia’s Macquarie Bank, analyzing China’s broader gold bullion imports data.
“Chinese gold imports tend to be weak when the price is high, and August saw the highest monthly average price for nearly three years.”
Mainland China’s manufacturing activity held flat again this month, the Caixin PMI survey said Friday morning.
Separate data from neighboring Japan meantime showed household spending in the world’s 3rd largest economy shrinking yet again in August, while the jobless rate ticked higher and consumer-price deflation accelerated to 0.5% per year.
Silver tracked and extended the rebound in gold bullion on Friday, recovering almost all of the week’s earlier 4% drop to trade at $19.64 per ounce.