GOLD BULLION held around $1240 per ounce in London trade Thursday, retaining its 3-month high as commodity markets pushed towards new 18-month records.
With energy costs already driving up headline inflation rates worldwide, Brent crude oil today rose above $55 per barrel as Nymex natural gas contracts traded 90% above their price of this time last year.
Silver bullion held firm with gold, trading just 20 cents shy of what refining and finance group MKS Pamp’s Asian desk called “psychological resistance” at $18 per ounce.
Despite the bullion price rise, the giant iShares Silver Trust ETF product (NYSEArca:SLV) yesterday failed to attract net investment yet again.
The SPDR Gold Trust in contrast (NYSEArca:GLD) needed to add metal for the fifth session running as new shares were issued, extending its longest stretch of growth since immediately before the UK’s Brexit referendum last June.
Adding an average of 5.6 tonnes per day so far in February, that’s still only half the average daily addition of the GLD’s first 8 years, when it grew to hold a record peak of 1353 tonnes in November 2012. 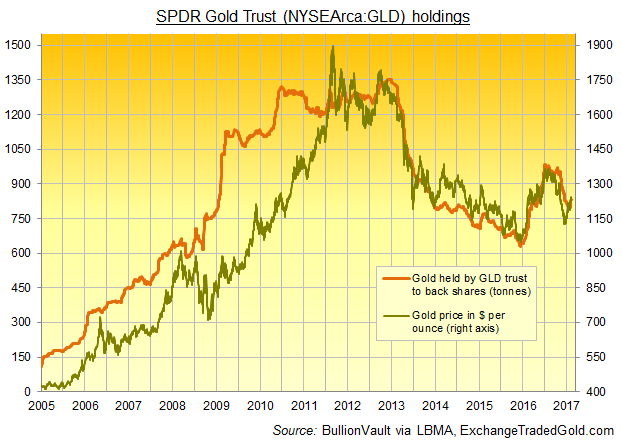 “Workers [are] experiencing a savage cost-push squeeze on real incomes,” says the latest global strategy note from French investment and bullion bank analyst Albert Edwards, warning that if headline wage growth rises to meet inflation then “even the Yellen Fed will be prompted into a more pronounced tightening than the market expects this year.
“Our long-term Ice Age bullishness in US government bonds remains,” SocGen’s strategist says, “but… 10-year yields can rise all the way to 3.25% and the long-term bullish trend will still be intact.”
Gold prices have now risen 10% from the 11-months low hit when 10-year US Treasury yields peaked at 2.6% in mid-December, the day after the Federal Reserve finally delivered its second interest-rate hike. 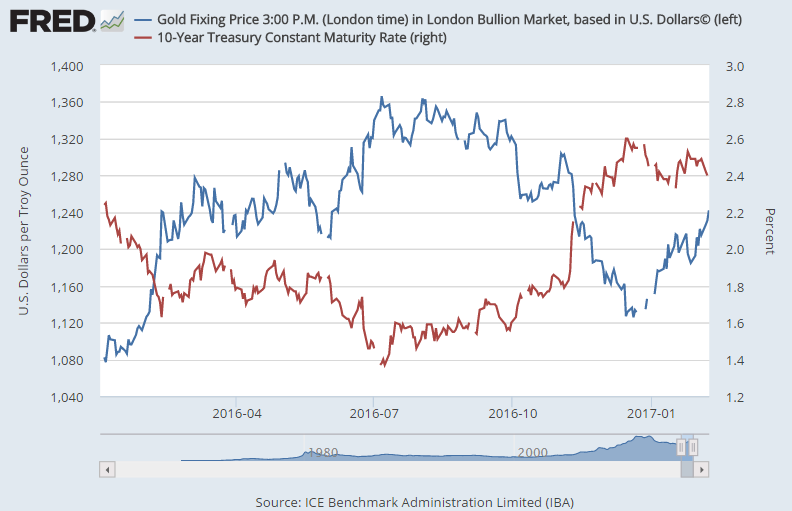 Betting on US Fed Fund futures now sees less than a 1-in-10 chance that the central bank will hike again in March.
A rise from the current 0.75% ceiling is currently priced at even money for the Fed’s June meeting, according to data from US futures exchange the CME.
World stock markets meantime crept higher again on Thursday, but held shy of last month’s peak as Tokyo shares fell 0.7% after January data said orders for machine-tools from Japan slowed to 3.5% annual growth.
Orders for new Japan-made machinery itself showed a 4.9% drop for 2016 overall.
The Cabinet Office’s statistics department now forecast a further 6.4% annual decline for the January-to-March period.
Shanghai gold bullion closed Thursday at a new 3-month high against the Yuan, and also extended its premium – over and above London Dollar quotes – to the highest since mid-January at $11 per ounce, more than 4 times the typical incentive to new imports to the world’s No.1 consumer market.