GOLD BULLION rallied from a new 1-week low in US Dollar terms on Wednesday in London, trading unchanged for the year-to-date at $1294 per ounce ahead of today’s key Federal Reserve decision on US interest rates.
Asian stock markets slipped while European equities rose, reversing yesterday’s pattern as major government bond prices edged higher, nudging longer-term interest rates down.
“Markets failed to react in any meaningful way to the landmark meeting between US president Donald Trump and North Korean leader Kim Jong Un,” says a trading note from Swiss gold bullion refiners and finance group MKS Pamp, “instead shifting focus to 3 critical central bank meetings…kicking off today.”
The US Fed’s June decision will be followed by the European Central Bank tomorrow and then the Bank of Japan on Friday.
Silver prices outstripped gold bullion once again, rising back towards yesterday’s 7-week high of $16.95 per ounce, but platinum dropped to set new 3-week lows beneath $893.
Short-term US rates edged lower, and 5-year Treasury bonds offered a yield of 2.81% per annum – matching the latest reading of US consumer-price inflation, released Tuesday.
Compared to real US interest rates, adjusted for the pace of inflation, the Dollar price of gold bullion has flipped from showing a strongly negative relationship to showing a solidly positive connection in 2018 so far.
On a 12-month basis, the week-to-week correlation of gold and 5-year US Treasury bond yields – adjusted by market-based inflation expectations – has gone from a median reading of -0.61 between 2008 and end-2017 to +0.43 so far this year.
That figure would read +1.0 if they moved perfectly in lockstep together, or -1.0 if they moved exactly opposite, with gold falling as real rates rose. 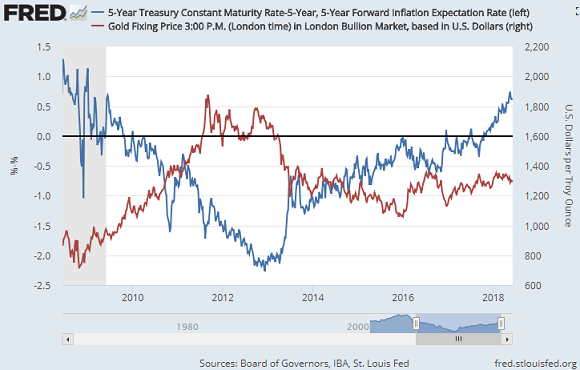 The rise in real 5-year yields so far in 2018 has totalled one-third of the rise over the same period five years ago, when gold prices fell at their fastest pace against the Dollar since the early 1980s.
Over the first 6 months of 2013 gold fell from $1657 to $1192.
To date in 2018 it shows no change at $1294 per ounce.
Betting on US interest-rate derivatives this morning put a 96% chance on the Fed raising its key interest rate to a ceiling of 2.0% at today’s meeting, as most analysts and economists predict.
Betting on the Fed then raising twice more before the end of this year has remained constant over the last month, putting the odds at 40% according to the CME’s FedWatch tool.
The Fed Funds futures market sees a slightly greater chance of 42.5% that the US central bank will raise only once more in 2018 after today.
Wednesday morning meantime saw “another dull and sluggish session for gold” in Asian hours says MKS, “remaining range-bound ahead of [these] important central bank meetings.”
Shanghai premiums slipped again this morning, drifting down to $5.50 per ounce above London quotes to offer just two-thirds of the typical incentive for new imports into China, gold’s No.1 consumer nation.
Gold bullion slipped Wednesday for Eurozone investors, edging back down to €1100 as the Euro rose on the FX market despite weaker-than-expected employment and industrial output data from the 19-nation single currency zone.
The UK gold price in Pounds per ounce in contrast rose back above £970 as pundits, politicians and traders weighed conflicting versions of yesterday’s “assurances” from Prime Minister Theresa May over giving Parliament a “meaningful vote” on the final Brexit deal now being negotiated ahead of the United Kingdom’s March 2019 exit from the European Union.