GOLD BULLION jumped to 1-month highs against a weakening US Dollar in London trade Tuesday, touching $1288 per ounce as Comex futures rose in New York and major Western government bond prices fell, driving yields higher ahead of tomorrow’s US Fed decision on interest rates, following much stronger-than-forecast Chinese manufacturing data.
London and European share prices also slipped as gold bullion rose 0.9% for the week so far.
Both the official NBS and private-sector Caixin/Markit PMI readings jumped to 51.2, up from barely-growing levels of 50.4 and 50.2 respectively.
US personal consumption expenditures for September yesterday showed a larger-than-expected rise in prices, up 1.2% from a year before.
Looking at copper prices – often seen a key marker of global economic strength and inflationary pressure – “The lack of investment [in mining] over the last three years will be felt increasingly over the next three,” says a note from Chinese-owned bullion bank ICBC for base-metals traders attending the London Metal Exchange’s LME Week.
“In our view, the lows of the cycle are in, and while it may be slow and steady in 2017…copper may well spring some surprises further down the line.”
After the LME – working with five banks, one proprietary trading house, and the mining-backed World Gold Council – in August announced plans to launch a London gold futures contract 30 years after a previous attempt was shut, US-based exchange group the CME – provider of the heavily-traded Comex precious metals contracts – today announced the launch of what it calls ‘London Spot Gold Futures’.
Planned for 9 January next year, the CME’s contract should launch before the LME’s LMEprecious platform, scheduled for “the first half of 2017.”
Competitor exchange ICE – administrator of the LBMA Gold Price benchmark, replacement for the century-old London Gold Fix since 2015 – said last month it will launch a New York-cleared futures contract for London-settled gold in February 2017, expressly to enable more direct participants in that daily auction, over and above the 13 banks currently needing lines of credit with each other individually.
The LME has since 2014 administered the London-based platinum and palladium benchmark price auctions. The CME has since 2014 administered the replacement of the century-old Silver Fix, working with data providers and news-wire Thomson Reuters, which today announced the loss of 2,000 jobs – some 4% of its global workforce – in a bid “to streamline its business.”
“Our new contracts will provide traders with streamlined access to the London spot market via the safety and transparency of cleared, exchange-traded futures contracts,” says CME Group’s head of precious metals, Miguel Vias.
“We believe [this] has the potential to create an even stronger link between the world’s two largest pools of precious metals liquidity, namely benchmark Comex Gold and Silver futures and the London spot markets.”
New data released Monday said that London’s gold bullion market – which remains ‘over the counter’ (OTC), with each buyer and seller contracting directly with each other – saw an average 529 tonnes settled between the accounts of the five member banks of the London Precious Metals Clearing Limited (LPMCL) in September. 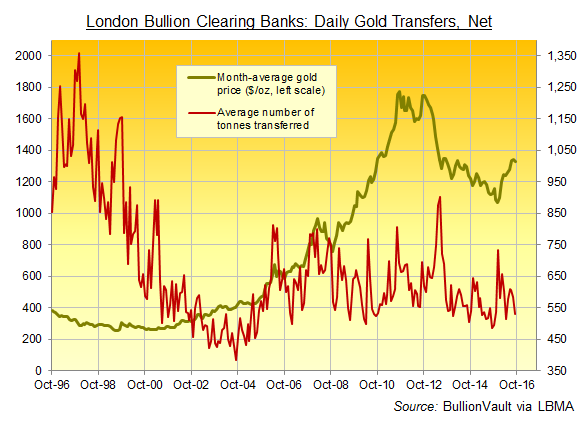 The lowest figure since April and 10% below the previous 2016 average to date, that volume stood 9% higher from September 2015.
It likely represents only a fraction of London trading in wholesale gold bullion bars, variously estimated at three, five or nine times as large in total – the vast bulk “unallocated” as a credit on the buyer’s account, rather than physically delivered.
The CME meantime saw gold futures contracts representing 595 tonnes of bullion change hands on a daily average basis in September, some 37% higher from the same month in 2015.
Registered stockpiles of bullion, available for delivery against maturing Comex gold contracts, yesterday totaled less than 12% of that figure, with actual physical settlement only a fraction of that number again.
“It is very difficult to create a second market trading the same thing if the first one is already successful,” said senior London metals trader John Wolff of the LME’s mid-1980s gold futures contract in a 2016 interview.
“Clients want to trade where the liquidity is.”
“The Achilles heel,” agreed fellow London Bullion Market Association founder Robert Guy in separate comments in 2012, “was the lack of domestic investor and speculator interest, without which no futures market can survive.”