GOLD BARS in London’s wholesale market held around $1160 per ounce in quiet trade Wednesday, rising back to last Friday’s 44-week closing low ahead of what analysts expect to prive “a fairly anticlimactic” US Fed decision to raise Dollar interest rates.
Entering 2016 with its first hike after 7 years at zero, the Federal Reserve’s policy committee forecast 4 rises this year, delaying until today a 0.25 percentage point hike to a ceiling of 0.75% on the Fed Funds rate.
The chances of a further delay with a “no change” decision today have jumped from less than 5% to almost twice as much in the last week, according to the CME’s FedWatch tool tracking bets on US interest-rate futures.
Almost two-thirds of bets on November 2017 rates see only 1 further hike after today, if at all. 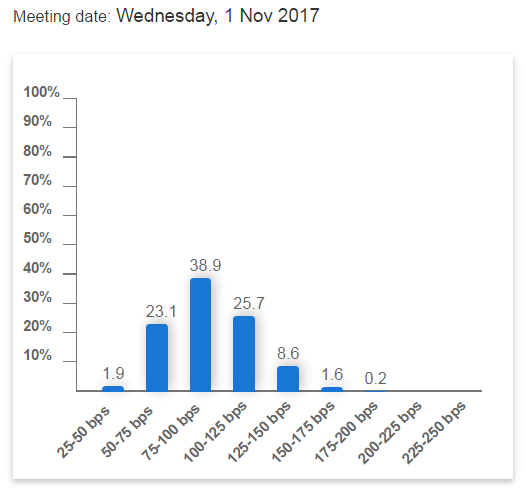 “Persistent offers apparent above $1160 leading into the FOMC decision today,” says Alex Thorndike, senior precious metals trader for Swiss-based gold bar refiner and finance group MKS in a note.
“[But] having a chat with a few traders over the past week, many are expecting a re-run of last year – a lurch lower after [the Fed announcement] but then a rebound in the weeks following.
“If for any reason however the Fed stays their hand and leaves rates on hold…there would be a sharp rally for gold with an immediate test of $1200 likely.”
“The reality is,” Bloomberg meantime quotes Robin Bhar, analyst at French investment bank and bullion bar market-maker Societe Generale, “the Fed’s expected hike should be pretty much priced in.”
Beyond that in 2017, “Yellen’s hands are tied and will be until there’s more policy certainty from incoming president [Donald Trump].”
US Treasury debt ticked higher in price again early Wednesday, nudging yields down once more from last week’s 18-month highs.
“Amid the surge in US and European bond yields,” says Bhar’s colleague at SocGen, macro-strategist Albert Edwards, “my attention is drawn to…the Bank of Japan’s revamped monetary policy.”
Now targeting a zero yield on 10-year Japanese government bonds, “The BoJ will have to work very hard indeed if, as seems likely, US 10-year yields continue to drift up to 3%.
“The printing presses will go into overdrive and the Yen will plunge, both against the Dollar and against the Euro,” predicts Edwards, reminding clients that the last time this happened, “Yen weakness dragged down the whole Asian currency complex and ultimately forced the Chinese to devalue.”
Shanghai gold bars today set new 3-year highs above London prices, with the premium for wholesale bullion landed in China breaking the equivalent of $33 per ounce at the city’s afternoon benchmarking auction as reports continue to say Beijing is restricting the number of import licenses it issues ahead of the key New Year festive season, aiming to curb outflows of capital and stem weakness in the Yuan currency.
“This year’s softness in [China’s] physical demand – particularly in the jewelry segment – could extend” into 2017 says a note from major global shipper, Swiss bank UBS. Against that however, its analysts also point to “macro uncertainty and currency volatility [with] a backdrop of relatively limited investment alternatives” for households in the world’s No.1 gold consumer nation.
Gold No.2 consumer nation India is meantime showing a slight return of gold demand after the shock demonetisation of its largest banknotes, says German financial giant Commerzbank’s commodities analysts.
But “it is doubtful whether this will immediately result in higher gold imports given that jewellery manufacturers are still likely to have large quantities of gold in stock following the high gold imports in October and November and the collapse in gold demand in recent weeks.”