GOLD BARS dealt in London’s wholesale market fell to new 3-week lows against a rising US Dollar on Tuesday, extended the drop on ETF investor selling as traders continued to bet on the Federal Reserve raising its key interest rate at next week’s March meeting.
So far in March the giant SPDR Gold Trust (NYSEArca:GLD) has now shrunk by 8.5 tonnes – equal to 1 day’s global gold mine output – as investor selling cuts the number of gold bars needed to back the ETF to a 1-month low beneath 837 tonnes. 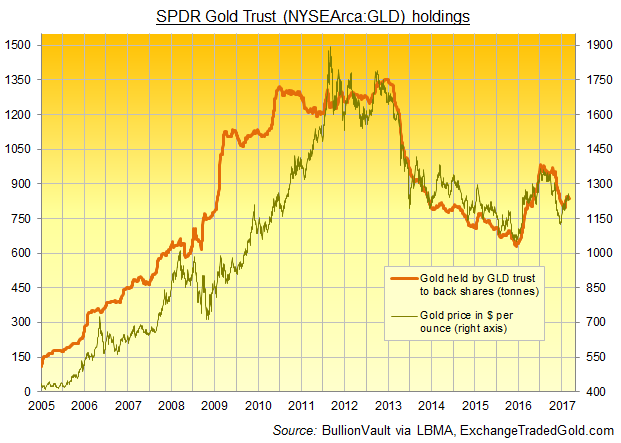 Silver prices also slipped Tuesday to new 3-week lows after the iShares Silver ETF (NYSEArca:SLV) shrank to its smallest size since last June, decreasing by some 9% since Donald Trump’s victory in the US presidential election of November.
After last week’s concerted ‘wake up’ call from a raft of Fed officials giving public speeches, betting on US interest-rate futures now sees a hike at next week’s meeting as 85% certain.
The balance of traders predict another hike in June or July, according to futures exchange the CME’s data, with another to follow in December or January.
That would still only take the Fed Funds rate to a ceiling of 1.5% however.
Last week’s US data put inflation in January at 1.9%, the closest it’s come to the Fed’s 2.0% target since 2012.
“Markets appear remarkably calm,” says analyst Jonathan Butler at Japanese conglomerate Mitsubishi, warning how “one factor that does not appear to be having much impact right now is the US debt ceiling.
“Congress needs to raise or suspend [it] before 15th March” – the day of the Fed’s mid-March decision on Dollar rates.
With Wall Street’s VIX volatility ‘fear gauge’ near 3-year lows, “Safe haven bids appear to have been largely priced out of gold,” Butler says.
“We believe there is room to re-build risk hedging in gold in anticipation of extreme, albeit low probability, market turmoil” should Trump and Congress fail to agree a new ceiling above the current $20 trillion.
Wholesale gold bar prices fell Tuesday morning to $1223 per ounce – a “support” level according to technical analyst Wang Tao at Reuters, with “the next support at $1213.”
“Support is at $1219,” counters bullion clearer and gold-bar market maker Scotia Mocatta’s New York team, pointing to the 38.2% retracement – a key Fibonacci level applied by some technical analysts – of the “Jan low-Feb high range.”
Gold bars traded in China – where the People’s Bank today said it kept its bullion reserves unchanged for a 4th month running in February – extended their premium over London quotes to $15 per ounce on Tuesday.
The British Pound meantime fell to its lowest Dollar value in almost 2 months ahead of the UK’s unelected House of Lords voting on the ‘Article 50’ Bill, needed to fire the starting gun on 2 years of Brexit negotiations with Europe.
That buoyed the price of large gold bars in Sterling terms to £1004 per ounce – unchanged for the week so far.