GOLD PRICES fell yet again as the Dollar rose on Thursday, touching the lowest level since mid-December at $1262 per ounce as new US data said the number of people claiming jobless benefits fell last week to fresh 4-decade lows.
European stock markets fell for the 4th time in 5 sessions and industrial commodity prices also fell as the Dollar rose to new 11-month highs against the Euro on the FX market.
Major government bond prices rallied as equities dropped, edging longer-term interest rates back down from yesterday’s 1-week highs.
“US Dollar strength and rising interest rates are not an ideal set-up for gold prices,” says a note from Swiss bank UBS’s Global Wealth Management team.
“But we stay bullish over the longer term,” UBS goes on – retaining a 12-month price forecast of $1375 – because the global economic cycle is now “at a late stage…larger US budget and current account deficits will eventually undermine the Dollar…[and] broader inflation trends [are] pointing up worldwide.
“Investors will likely increasingly look to own real physical assets like gold.”
Investor interest showed no change Wednesday in the SPDR Gold Trust (NYSEArca:GLD), leaving the world’s largest gold-backed ETF product unchanged in size for the 8th session running.
That matches the GLD’s 3 previous longest runs of no change, back in October and Nov’ 2017 and then in April 2018. 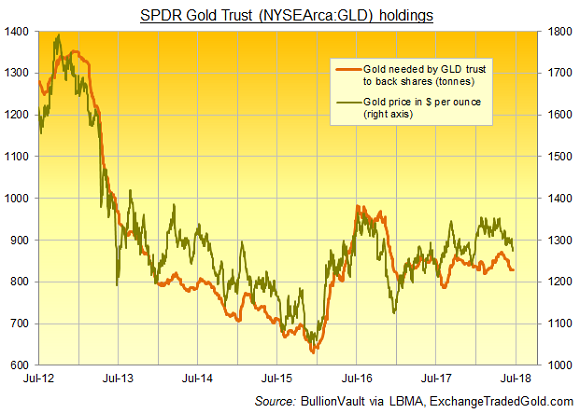 With silver prices setting fresh 1-month lows on Wednesday, investor interest in the giant iShares Silver Trust (NYSEArca:SLV) grew to its largest size since 21 May.
The SLV needed 9,842 tonnes of silver to back its shares at last night’s close, equal to 38% of annual silver mine output worldwide.
Both silver and gold also fell priced in the Euro currency on Thursday, but only to 1-month and 2-week lows respectively.
German, French and Italian investors saw gold touch a low of €1092 per ounce – down some 3.5% from the 1-year high hit at the end of May.
Gold priced in Sterling also fell to its lowest level in a month, slipping to £956 as the Bank of England held UK monetary policy unchanged but 3 of its 9 committee members dissented, voting instead to raise interest rates from the current 0.5% per year.
Favoring “an immediate increase in Bank Rate,” say the BoE’s notes from the meeting, “these members [fear] sustained inflation” could force sharper rate rises ahead “and hence a sharper adjustment in growth and employment.”
Retail gold prices in New Delhi have meantime “tumbled” 1% so far this week according to The Times of India, thanks to “muted demand“.
China’s benchmark wholesale price fell today to its lowest level since 22 May, but the Yuan currency fell harder to reach new 5-month lows against the Dollar.
That edged the premium for gold bullion bars delivered in Shanghai over London up to $5.80 per ounce, still one-third below the typical incentive for new imports into the world’s No.1 gold consumer nation.
Out of 6,300 words in today’s Bank of England minutes, just 1 paragraph refers to the UK’s March 2019 Brexit from the European Union, saying only that the “economic implications [will] be influenced significantly by the expectations of households, firms and financial markets” about the UK’s future trading relationship with the world’s largest economic bloc.
Tory rebel Dominic Grieve’s decision to vote on Wednesday against his own amendment to the UK Government’s Brexit Bill was “a crucial step” in working towards a “smooth and orderly Brexit,” said Prime Minister Theresa May today.