GOLD PRICES rallied for the second time in two sessions from a dip below $1310 per ounce in London on Tuesday, holding onto a slight gain for 2018 to date against the Dollar ahead of tomorrow’s US Federal Reserve decision on interest rates, widely expected to bring the first of four quarter-point hikes this year.
World stock markets steadied as Facebook (Nasda:FB) held onto yesterday’s 12% plunge as founder and CEO Mark Zuckerberg was summoned by the UK Parliament‘s inquiry into ‘Fake News’ in relation to data consultants Cambridge Analytica’s apparent abuse of FB’s user privacy.
Silver extended the dip in gold prices, touching its lowest Dollar level since 22nd December in wholesale bullion trade at $16.13 per ounce.
Versus the British Pound, silver prices fell to £11.55 – the lowest since just before the UK’s shock Brexit referendum result of June 2016 – as Sterling rose again amid the expulsion of 23 Russian diplomats and their families over the Skripal nerve agent poisoning.
With the UK Government today under attack from so-called Brexiteers over its “transition” exit deal with the European Union, new data said Tuesday that consumer-price inflation in the world’s 5th largest national economy slipped back to 2.7% per year in February, retreating further from November’s 5.5-year high of 3.1% as “the price of petrol and food played a key part” in lowering the rate of growth.
Tuesday’s trading however saw Brent crude oil rise back towards the highest since January’s 3-year highs, rising above $67.50 per barrel.
Major government bond prices fell, edging 10-year US interest rates up to 2.88% and reversing last week’s move.
Giant gold-backed investment vehicle the SPDR Gold Trust (NYSEArca:GLD) meantime reported its heaviest 1-day growth since 18th January for Monday, with its sharpest month-on-month growth since 1st September at 2.8%.
On a rolling 22-day basis, the size of the GLD is now moving more strongly opposite to gold prices than any time since October.
Showing a median correlation from launch in 2003 to late 2017 of +0.42 with month-on-month changes in the gold price, the size of the GLD has switched to a -0.17 correlation with gold prices over the last half-year. 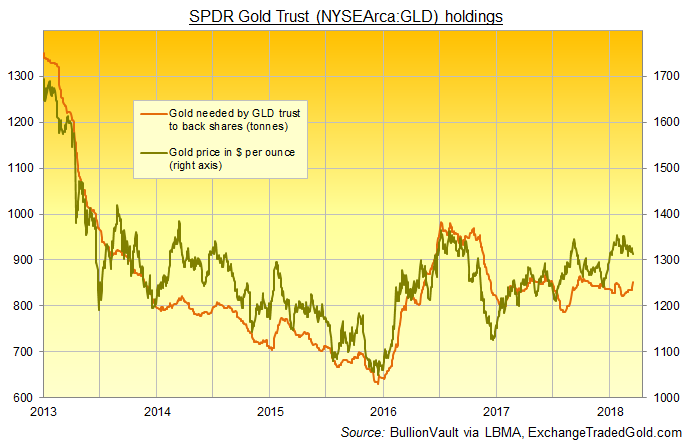 Data for end-December put the proportion of GLD shares held by investment institutions and professional fund managers at 39.8%, the highest level since the UK’s Brexit referendum shock of Q2 2016.
“Those investors who bought and held gold out of fear of economic chaos have been pulling back from gold,” said a recent presentation from US-based consultancy CPM Group, “while investors more interested in capital appreciation have been buying.”
Reporting dismal US retail investment gold coin and small-bar demand in its latest market update, “Some might argue that the US Mint has become a victim of its own success,” say specialist analysts Thomson Reuters GFMS, “and every coin it sold in its [global financial crisis] glory days was in fact a golden nail in its own coffin.
“We don’t want to take it that far, but do acknowledge the unwillingness of the North American retail market to absorb more newly fabricated metal…A lot of trading has shifted to the secondary market, where discounts to newly fabricated products [have] retreated to unprecedented lows.”
Turning to silver coins, “Wholesalers are currently awash with inventory,” said longstanding coin dealers Asset Strategies International in a note to clients on Monday.
In contrast, the largest silver-backed ETF – the iShares Silver Trust (NYSEArca:SLV) – has swollen in size by 1.8% as silver bullion prices have fallen 8% from late-January’s 4-month highs, needing almost 200 tonnes extra of bullion to back its shares in issue.
All told, the SLV ended Monday needing 9,942 tonnes of bullion backing – the largest size since prices fell below $16 per ounce in mid-December.