GOLD BARS traded in London’s wholesale market rallied from yesterday’s 1-week lows to trade around $1280 on Thursday, regaining $5 per ounce as world stock markets again rose with commodities after a late sell-off in US trade.
Despite analyst chatter over this weekend’s apparently “four-horse race” in the French presidential election, the Euro rose to new 3-week highs against the Dollar, pushing the price of large gold bars for single-currency traders down almost 3% from Monday morning’s spike to 8-month highs at €1221 per ounce.
Gold priced in Sterling held lower again, down 3.3% from this week’s top to trade beneath £1000 per ounce as the UK’s snap General Election campaign got underway.
“The tug of war continues between safe haven buying ahead of the French elections and technical selling,” says a market note from German refiners and gold bar manufacturers Umicore.
“With geopolitical issues starkly affecting gold prices, price trajectory outlook becomes inherently hazy,” says economist Barnabas Gan at OCBC Bank in Singapore.
“The current environment will be risky enough to sustain prices for now,” reckons Kirill Kirilenko, an analyst at metals consultancy CRU in London, “but come October if none of these events evolve into something bigger, then we could see prices back down to $1200…especially if the Federal Reserve continues to tighten interest rates.”
US secretary of state Rex Tillerson today accused Iran of “alarming ongoing provocations” in the Middle East, warning that it was “travel[ing] the same path as North Korea.”
The US central bank should start selling its QE Treasury-bond holdings “relatively soon,” said non-voting member Eric Rosengren of the Boston Fed yesterday.
“I expect normalization will be gradual,” countered Vice Chairman Stanley Fischer in a speech to the IMF this morning, with “a gradual and ongoing removal of accommodation…both to maximize the prospects of a continued expansion in the US economy and to mitigate the risk of undesirable spillovers abroad.”
The giant GLD gold ETF yesterday grew its shares in issue, expanding the amount of bullion bars needed to back its value by almost 12 tonnes – the heaviest 1-day inflow since September – to a total of 860 tonnes, a 4-month high. 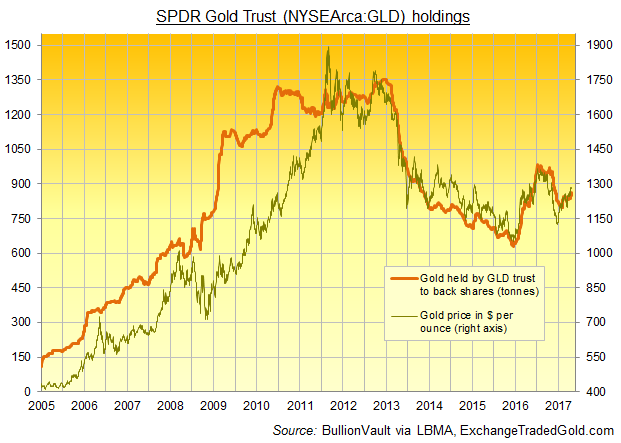 The SLV silver ETF, in contrast, ended Wednesday needing 10,149 tonnes of metal, down half-a-per-cent from the start of this week and near its smallest size in a year.
Silver prices held Thursday around $18.20 per ounce, cutting last week’s 3% gain in half.
Noting how Fed chair Janet Yellen recently said the US central bank “is doing pretty well” in meeting its dual mandate of low inflation and a strong jobs market, “The increasing volume of central bank hubris may…explain the recent breakout of gold to the upside!” says ‘perma-bear’ strategist Albert Edwards at French investment bank and bullion-bar market maker Societe Generale.
“It is this sort of comment that has led Marc Faber to want to short central bankers – the only way being to buy gold.”