GOLD PRICES steadied from yesterday’s plunge through $1200 per ounce on Thanksgiving Thursday in London, as quiet trading on the US holiday also saw stocks, bonds, commodities and currencies little changed.
Bullion held to back the value of shares in the SPDR Gold Trust (NYSEArca:GLD) shrank another 13 tonnes Wednesday as gold fell back to its 2013 crash low and investors quit the exchange-traded fund, taking its total holdings to a new 5-month low at 892 tonnes.
The GLD has now shrunk every day since Donald Trump’s US election win a fortnight ago, the longest stretch at 10 sessions running since May 2013.
Net outflows from the GLD – the largest gold ETF – have added 1 weeks’ global gold mining output to supply since November 8. 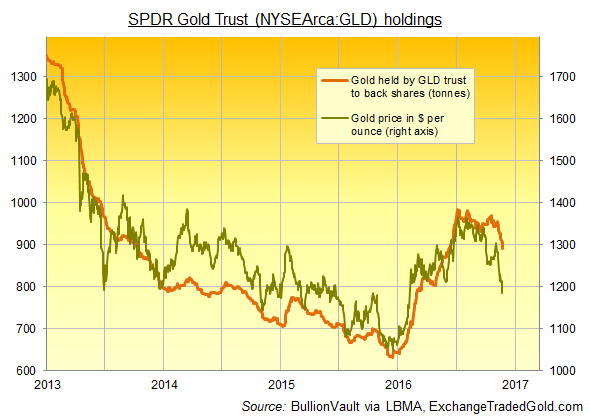 “Gold prices have dropped below $1200 on the Trump reflation trade,” says a new analysis from Dutch bank ABN Amro’s Georgette Boele, referring to the jump in US bond yields and equity prices.
“We expect the current negative environment to remain in place for gold prices in 2017.
“Investor demand remains the most crucial driver pushing gold prices lower. From an investor point of view there is [now] little reason to hold gold as an investment.”
With gold prices bottoming in December 2015 at $1045 per ounce, ABN’s strategist last year forecast a further drop in gold prices to $900 per ounce by end-2016, writing this January that gold was “no longer a safe haven“.
Gold then began a 30% price rise to July’s post-Brexit peak at $1375, by when Boele had raised ABN’s end-2016 forecast to $1350, predicting in July that “a Trump victory would be bullish for gold prices.”
“I don’t believe it,” meantime says specialist consultancy Metal Focus’ Phil Newman about rumors that the government of India – the world’s No.2 consumer market – may ban gold imports.
“[The rumors] seem to have been started by [India’s] market participants,” he told Kitco News. “Why were they started? We don’t know.”
“Panicked gold traders and jewellers,” The Times of India reported one week ago, “have circulated messages amongst themselves saying the government could ban import of gold for domestic use from early next year.”
The rumors – widely reported since last week by global news-wires – followed the Modi administration’s shock demonetisation of India’s largest banknotes, forcing a cash crunch that has halted business across the nation as people queue outside its banks to transfer their 500 and 1000 Rupee notes for legal tender.
“What is real is that there has been tremendous uncertainty in the gold and silver market in India,” Kitco quotes Newman at Metals Focus.
Amid the global price drop, investors in Western gold markets “are looking for the white knight of the physical [Asian consumer] market,” Newman adds, “and it is hard to see where it is going to come from.”
Silver prices again outpaced gold on Thursday, holding firmer with a 1.3% loss against the Dollar for this week so far at $16.36 per ounce at lunchtime in London.
The iShares Silver Trust (NYSEArca:SLV) – the world’s largest silver ETF – has shrunk by almost 1% since Monday, liquidating nearly 100 tonnes of bullion by end-Wednesday.
That’s equal to more than 1 day’s global silver mine output.