GOLD PRICES failed to hold a $5 bounce in London trade Tuesday morning, dropping back to $1186 per ounce as world stock markets fell with government bond prices, driving longer-term interest rates higher as the Dollar also rose on the currency market.
“It [is] a moment to cool down the temperature,” said a European Commission spokesperson on Tuesday as EC President Jean-Claude Juncker met Italy’s Robert Fico, president of the chamber of deputies, to discuss Rome’s planned 2019 budget deficit.
But Milan’s stock market hit 7-month lows and the price of Italian government debt fell once again, driving Rome’s cost of borrowing up to a new 5-year record spread over benchmark German Bund yields of 317 basis points.
The Euro lost almost 1 cent to hit 7-week lows against the Dollar at $1.14322.
That buoyed the gold price for Eurozone investors to €1038, halving Monday’s steep 1.1% drop.
“[To reach $1400 gold] you would have to see some real change in the financial markets,” says investment and bullion-bank analyst James Steel, speaking at base-metals conference London Metals Week and saying that gold needs much greater volatility in world stock markets to attract investment flows.
“A weaker Dollar would [also] have to be the case.”
Averaging -0.49 over the last 45 years, the 12-month correlation between Dollar gold prices and the US currencies trade-weighted forex value last week read -0.85.
That figure would read +1.0 if they moved perfectly together, or -1.0 if they moved exactly opposite.
Gold’s 12-month correlation with the USD index has now been negative for 334 weeks without break, the longest stretch since global currencies began floating freely in 1973. 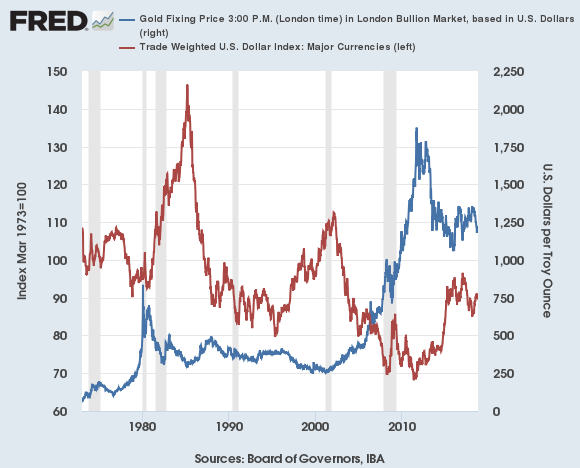 “The ‘jump to default’ risk is high for US sovereign credit,” reckons gold-miner-stock fund manager John Hathaway at Tocqueville Asset Management, warning of an imminent “30% depreciation of the Dollar.
“We believe that the gold market bottomed in August, and that exposure to precious metals is a credible strategy to mitigate risk of a Dollar collapse.”
China’s Yuan stabilized versus the US currency on Tuesday, holding around 18-month lows at ¥6.91 per Dollar.
That pulled the price of gold delivered in Shanghai back below the equivalent of $1200 per ounce at the city’s benchmark afternoon fixing, a premium of $8 per ounce above global quotes for London settlement.
Tokyo’s stock market meantime fell hard as Japan returned from the annual Health & Sports Day holiday, pulling the Topix index 3.5% below last week’s 7-month high.
Sterling also retreated versus the Dollar, down over 1 cent as ex-UK minister Steve Baker said “at least 40” fellow Conservative MPs are ready to vote against their leader Prime Minister Theresa May’s proposed Brexit deal for March 2019, the so-called “Chequers Plan”.
That failed to outpace the decline in bullion however, with the UK gold price in British Pounds per ounce falling back to £908 – just £7 above last month’s revisit of the cheapest level since mid-2016’s shock Brexit referendum result.
“If you think that eventually the forces of anti-globalization will wear trade down to no growth, then the gold market is likely to do well,” says Steel at HSBC.