GOLD PRICES fell hard against the Dollar at the start of New York trade on Thursday, dropping further below $1200 than any time so far in September after the Federal Reserve’s latest hike to interest rates was followed by stronger than expected US jobs data.
Last week saw claims for jobless benefits rise less than analysts had forecast despite the impact of Hurricane Florence, holding near half-century lows according to the Department of Labor.
The rising Dollar pushed gold prices down below $1187 per ounce, the lowest since 24 August, as a row over Italy’s government budget also saw the Euro currency fall and Milan’s stockmarket drop 1.0% from yesterday’s 7-week high. 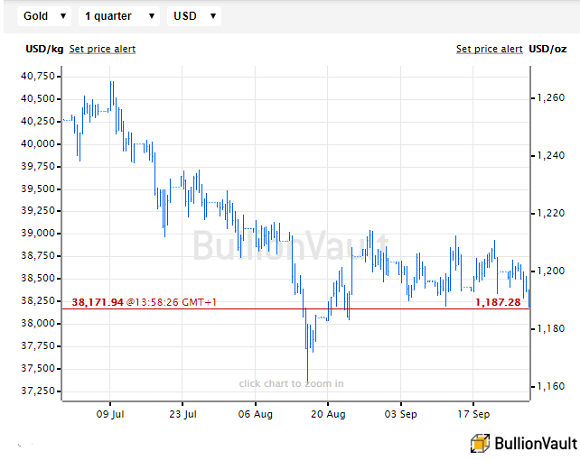 New York equities held flat after slipping on Wednesday’s widely-expected quarter-point rise to the Fed Funds rate.
Silver meantime erased the last of this week’s earlier 1.7% gain to trade at $14.25 and platinum also fell hard, trading $20 beneath last Friday’s spike to 6-week highs of $839.
[Save a further 0.5% buying platinum on BullionVault before this weekend with this September 0% commission offer.]
“There has been some physical demand below $1200, which is supporting gold,” Reuters today quotes Hong Kong dealer Peter Fung at Wing Fung Precious Metals.
“[Because] the Fed statement did not have much of an impact on the Dollar,” said brokerage INTL FC Stone’s analyst Edward Meir overnight, “[that’s] possibly giving gold an element of support.”
Wednesday’s Fed statement cut the word “accommodative” while voting members confirmed their outlook for inflation, growth and interest rates on the “dot plot” forecasts.
Betting on 3 or more further US interest-rate hikes over the next 12 months retreated overnight after the Fed’s decision, dropping to 43.1% of speculative positions from Wednesday morning’s level of 49.1% according to data from the CME derivatives exchange.
Italian bond prices rallied meantime, pushing down Rome’s cost of borrowing after the Finance Ministry denied reports that its chief, Giovanni Tria, will resign over demands from the ruling coalition M5s party for a “basic income” paid to poorer families, plus a cut to the state retirement age, in his new 2019 budget.
Analysts say that deputy prime minister Luigi di Maio’s plan to “abolish poverty” risks breaching the Finance Ministry’s so-called “Tria line” of a 2019 budget deficit equal to no more than 2% of GDP.
Italy already has the heaviest debt-to-GDP ratio of the 19 single currency Euro nations at 131%.
Pushing the 2019 deficit up to 2.4% of GDP as the M5s has asked may see large investment funds – including US giants Blackrock and Fidelity – sell off the position in Italian bonds they have taken in recent weeks “betting on a prudent budget,” reports financial paper Il Sole 24 Ore.
“Such a decision could also impact Italy’s credit rating,” it goes on, “with both Standard & Poor’s and Moody’s planning a credit review at the end of October with a high risk of downgrading.”
Gold priced in Euros today rallied from a new 32-month low at €1013, rising back to last week’s closing level at €1020 per ounce.