GOLD PRICES slipped slightly back on Monday morning in London as the US Dollar surged after 6 straight weeks of losses, writes Steffen Grosshauser at BullionVault.
Gold traded $6 below last week’s close at $1349 per ounce after touching an 18-month high at $1365 early on Friday.
US Treasury bonds meantime extended their New Year 2018 sell-off, pushing up the yields offered to new buyers to the highest in 4 years.
Last week’s 3-year low in the Dollar came after US President Donald Trump and his Treasury Secretary Steven Mnuchin spoke in favor of a weaker US Dollar because of what they called “unfair” trade practices by other governments.
“The Dollar is getting some help from higher US yields and we have the Fed and the jobs data this week,” says Alvin Tan, currency strategist at Societe Generale in London.
“But the broader story remains selling the greenback into any rallies.”
Ahead of Friday’s official estimate of US wages and employment this Friday, the Federal Reserve is expected to leave policy unchanged on Wednesday having raised rates to 1.50% at its December meeting.
Measured in Dollars, gold prices have now rallied more than $100 in the last six weeks, gaining 7.0% for US investors.
Silver prices have risen only slightly more, up 7.5% since mid-December to trade at $17.27 per ounce in London on Monday lunchtime
Hedge funds and other ‘Managed Money’ speculators raised their bullish bets on gold prices for the 6th time straight in the week-ending last Tuesday, according to data released by US regulator the Commodity Futures Trading Commission (CFTC) on Friday.
That took their net speculative positioon to the highest since mid-September.
Silver bullishness, in contrast, was down by 28.5% last week, having been the most bearish on record at the turn of the year. 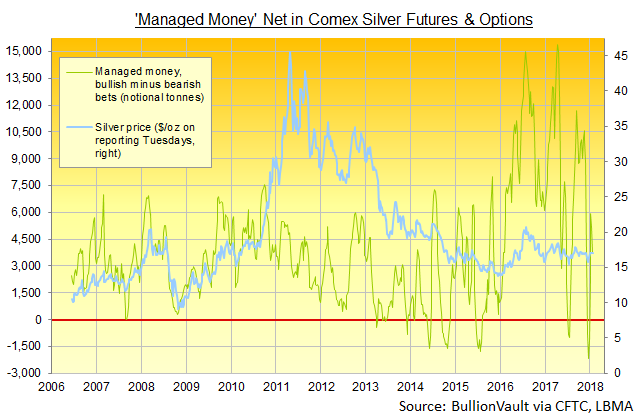 Investor interest in the iShares Silver Trust (NYSEArca:SLV) edged 0.3% higher by Friday’s close last weeks new 2-year lows, requiring 9,763 tonnes of bullion to back its value.
Holdings of gold bullion needed to back the giant SPDR Gold Trust (NYSEArca:GLD) meantime grew 0.2% to near a 5-month high at 848 tonnes.
“Total known ETF holdings of gold are up 1.4% so far this year, totalling 72.5 million ounces at the end of January, with inflows relatively steady,” said BMO Capital Markets analyst Andrew Kaip.
“This gives us a degree of confidence that a gold price range above $1300 per oz can be sustained for now.”
“The recent strength in gold is largely a dollar-related phenomenon,” notes Bloomberg columnist Marcus Ashworth. “The metal’s recent rise isn’t about inflation rising or cryptocurrencies falling.”
Japan’s financial regulators announced stricter controls and regulation of cryptocurrency markets after the Japanese exchange Coincheck was hacked, stealing tokens more than $500 million.
The British Pound today turned lower on the currency markets as the UK’s Prime Minister Theresa May faced new pressure from lawmakers in the upper house demanding changes to her Brexit legislation, described by some opponents of leaving the European Union as “fundamentally flawed” and “constitutionally unacceptable“.
The gold price in UK Pounds per ounce rose £3 to £956 on Monday, only 1.3% higher from 6 weeks ago.
The European Central Bank meantime has to end its quantitative easing – scheduled for review in September – as soon as possible according to the Netherlands’ central bank head and ECB Governing Council member Klaas Knot.
“The program has done what could realistically be expected of it…There is no reason whatsoever to continue.”