GOLD PRICE gains over the previous 7 sessions ended in Asian and London trade Thursday, with the metal retreating almost $10 per ounce from this week’s new July highs as the US Dollar rallied following “no change” decisions on sub-zero rates and record QE bond buying from both Japan and the 19-nation Euro currency zone – the world’s 4th and 2nd largest economies respectively.
Three of the Bank of Japan’s 10 voting members dissented for the fifth meeting so far in 2017, saying that negative rates on commercial bank deposits risk “adverse effects” and calling unlimited quantitative easing – which now target a 0% yield on 10-year Japanese government bonds – “excessive”.
The Yen retreated from 3-week highs versus the Dollar while 10-year JGB prices slipped on today’s news, edging yields higher towards 0.08% per annum.
Tokyo’s Topix share index rose to new 2-year highs, but remained over 40% below its all-time peak of 1989.
“Incoming information confirms a continued strengthening of economic expansion in the Euro area,” European Central Bank president Mario Draghi then said at lunchtime in Frankfurt, adding that “conditions remain broadly supportive” for higher consumer-price inflation despite the Euro’s recent strength on the FX market.
“A very substantial degree of monetary accommodation is still needed [however] for underlying inflation pressures to build up,” Draghi said, rowing back from his last policy-meeting press conference when he suggested that QE bond buying could be “tapered” sooner than the current December deadline.
The Euro fell and then jumped on Draghi’s comments, whipping the gold price for Eurozone investors before holding the metal 1.6% above early July’s near 18-month lows beneath €1057. 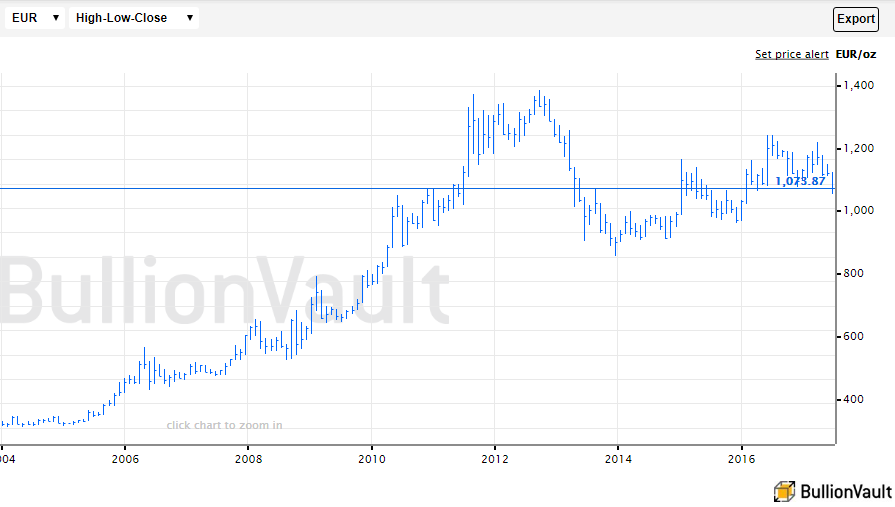 Shares in the EuroStoxx 50 index rose, extending their month-to-date gains to 2.6% but still more than one-fifth below the pre-financial crisis peak of summer 2007 and one-third below the record “dotcom” high of New Year 2000.
Government bond yields for Italy and Spain – both seeing fresh rescues of commercial lenders in 2017 – meantime eased lower, retreating further from early 2017’s multi-year highs, while German 10-year Bund yields edged higher but stayed below last week’s 18-month highs of 0.60%.
Consumer-price inflation across the 19-nation Euro currency zone last month slowed to its weakest annual pace so far in 2017, receding to 1.3% per year.
Already doubling between 1999 and the eve of the financial crisis in 2007, the ECB’s balancesheet has since grown a further 140% to reach more than €3.6 trillion.
More than half of its assets are Euro-denominated financial securities, while the next largest item – lending to Euro area credit institutions – accounts for 16%.
Unchanged by weight, the Eurosystem’s central-bank gold holdings were the third largest item at end-2016, rising 90% in value over the last 10 years to €382 billion.
“In terms of investment demand, the physically backed [ETF] products have seen outflows recently rather than inflows,” Reuters quotes Swiss private bank Julius Baer’s analyst Carsten Menke.
“So there hasn’t been much support from that side.”
The world largest gold-backed exchange-traded fund, the SPDR Gold Trust (NYSEArca:GLD) yesterday saw another outflow of metal as shareholders liquidated the stock.
Cutting the GLD’s holdings to new 5-month lows at 816 tonnes, that extended the trust fund’s redemptions over the last 5 trading sessions to 16.3 tonnes – a new 5-session record GLD outflow for a week of rising gold prices.