GOLD PRICES steadied against the rising Dollar on Friday but headed for the 3rd weekly loss of 2018’s six weeks so far at $1315 per ounce amid what traders called “carnage in the stock market.”
Gold prices in all other major currencies bar the Japanese Yen held firm for the week, rising in Sterling and Euro terms.
UK and Eurozone government bond prices also rallied on Friday, nudging longer-term interest rates lower.
US Treasury bonds fell back however, pushing 2-year yields back up to 2.14% – just below the 10-year highs reached last week – while 10-year yields touched 2.86%, some 30 basis points higher from this time last month.
Speculative betting on the US Fed raising its key overnight interest rate in 2018 has, in contrast, barely changed over the last month.
Giant gold-backed exchange-traded fund the SPDR Gold Trust (NYSEArca:GLD) saw more shareholder liquidation on Thursday, pulling the amount of bullion needed to back the value of its shares in issue down to 826.3 tonnes, some 2.7% smaller from 2 weeks ago.
“US funds captured 73% of global [gold ETF] inflows during January,” says a note from market-development organization the World Gold Council today, “reversing the 2017 trend” when European trusts expanded faster. 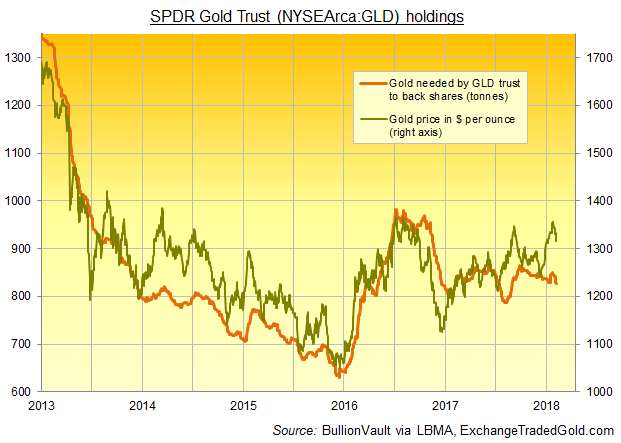 “I am now bearish gold,” says New York strategist Russell Browne at Canada’s Scotia Bank in a technical note, “targeting the $1300 level.”
“On the lower side we should see some support around $1308-10,” counters a trading note from refiner and finance group MKS Pamp’s Asian desk, “[but] a move through there will see the yellow metal testing the psychological $1300 level.”
“After a failed attempt to confirm the multi-year [bullish] Inverted Head and Shoulder [pattern] at $1356,” says French investment bank Societe Generale’s technical team, “gold has embarked into a correction and has met a first graphical objective at $1308 representing January lows and mid-October high.
“The ongoing correction could extend to November high at $1300.”
Gold fell further on Friday against the Japanese Yen – often seen as a ‘safe haven’ currency during periods of stockmarket turmoil – to head for its sharpest 1-week drop since October 2016.
Losing another 2.3% on Friday, Tokyo’s Nikkei 225 stockmarket index has now fallen by more than one-tenth from this time last month. So too has Germany’s Dax index.
Chinese equities have lost 8.3%, France’s Cac40 is down 8.1% and the internationally-focused FTSE100 in London has lost 8.0%.
Gold priced in Sterling meantime rallied £20 per ounce from Thursday’s slump to an 8-week low, made after the Bank of England held UK monetary policy unchanged but forecast growing inflationary pressures and “hinted” at a faster pace of interest-rate rises ahead.
The UK gold price in Pounds per ounce touched £954 just before lunchtime Friday in London.