COMEX GOLD contracts recovered a $5 drop against a weakening US Dollar in London lunchtime trade Tuesday, rising back to last week’s finish at $1275 after what analysts called another “large sell” order on the futures market.
Commodities retreated and bond prices edged higher as world stock markets fell again.
Germany’s Dax dropped for the fourth session running after the 19-nation Eurozone released a raft of stronger economic data, led by 2.5% annual GDP growth across the region for the third quarter of the year.
“Speculative financial investors stopped withdrawing from gold and built up net long positions again in the week to 7 November,” says German financial group Commerzbank in a commodities note today, looking at the latest Comex gold derivatives data from US regulator the CFTC.
“They have also been betting more heavily on rising silver prices again of late.” 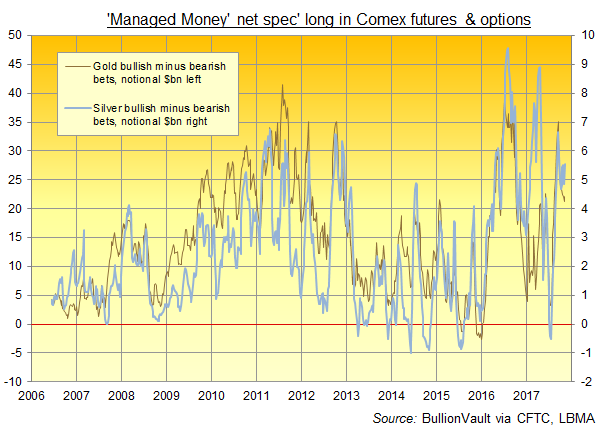 The net long position in Comex gold derivatives rose 4% in the week-ending last Tuesday, according to the CFTC data, taking it to the notional equivalent of 540 tonnes, some 43% greater than its historic average.
Bullish postioning in silver in contrast, net of money managers’ bearish bets, saw a 13% jump, taking it to a 7-week high notionally equivalent to 10,180 tonnes, fully 165% greater than the average size since current data began in 2006.
In Dollar terms, that made the “net spec long” in silver worth over 25% of the equivalent net betting on gold, its largest level since April and one-third larger than the historic average.
In the physical market, “China were light buyers [of gold Monday],” says today’s trading note from MKS Pamp, the Swiss refinery group, reporting the Shanghai premium over quotes for London settlement at $8 per ounce, in line with typical levels.
“London came in on the bid…[and New York] tried to push the yellow metal through $1280 on several occasions but heavy offers on Comex capped the market.”
Silver prices meantime “managed to recoup the 17 handle,” says MKS, “finding near term support at the 100-day Moving Average” according to a technical analysis from bullion clearers and market-maker Scotia Mocatta’s New York team.
“[But] the metal remains locked between $17.18, the 200-day MA,” says Scotia, “and $16.77, the 23.6% Fibo retracement level of the Sep-Oct decline.”
On the FX market Tuesday, Tthe Dollar fell to 3-week lows against the single currency at worse than $1.17 per Euro.
That helped drive the gold price for Euro investors down below EUR1085 per ounce, its cheapest level since 26 October.
The UK gold price in Pounds per ounce meantime held tight around £972 as Sterling recovered a half-cent drop on the FX markets following news that consumer-price inflation held last month at a 5-year high of 3.0% per annum.
The Bank of England this month raised its key interest rate to 0.5% after it holding it at 0.25% for almost nine years.