GOLD and SILVER prices fell to new multi-month lows versus a strengthening US Dollar at the start of European trade on Monday, hitting 4-month and 16-month Dollar lows respectively
Priced in the Euro both precious metals fared worse still, dropping to their cheapest since February and March 2016.
With gold and silver hitting US Dollar lows of $1205 and $15.21 per ounce respectively at 8am London time, world-leading base-metals platform the London Metal Exchange this morning launched its new LMEprecious contracts, aimed at “modernising the gold and silver markets” currently centered in the UK capital, and also set to compete with dominant US-based futures and options exchange the CME Group’s Comex products.
Latest data from US regulators say that hedge funds and other professional traders worldwide fitting the ‘Managed Money’ category of participants last week slashed their net bullish betting on Comex gold derivatives in half, down to the smallest size since New Year.
Those speculators cut their total number of bullish bets on Comex gold futures and options for a fourth week running, the CFTC data show, down 11% from a week earlier to the smallest size since mid-March.
The ‘Managed Money’s short position in contrast – counting bets that gold prices will fall – jumped 31% to its largest level since gold prices began their recovery from 6-year lows in January 2016. 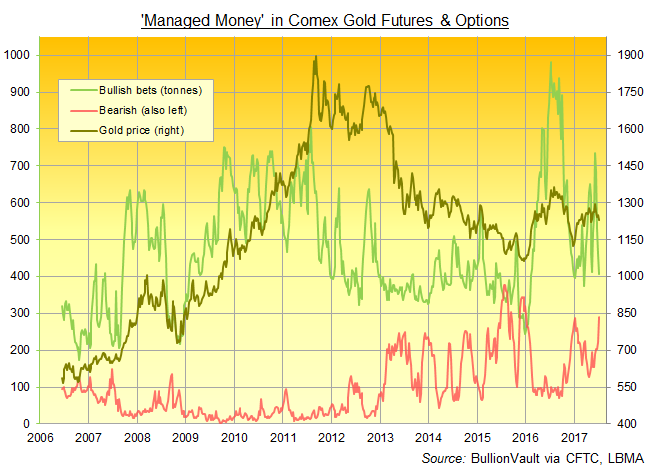 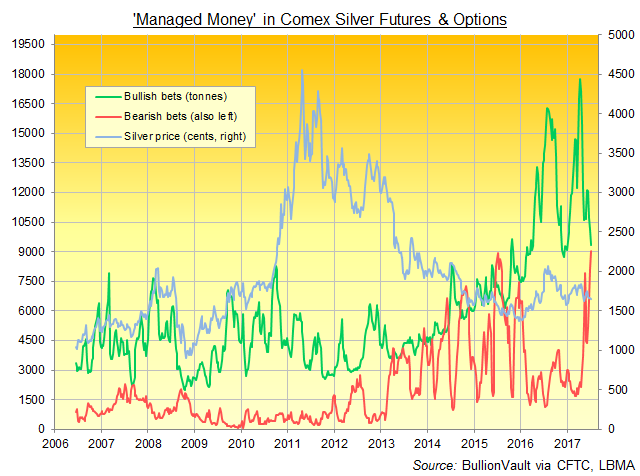 “The grey metal continues to trade friendless,” says Swiss refiner MKS Pamp’s latest daily trading note, “and surely it’s only a matter of time before we see a 14 handle.”
Giant silver-backed exchange-traded trust fund the iShares Silver Trust (NYSEArca:SLV) in fact expanded last week by 0.6%, requiring a 5-week record of 10,629 tonnes in bullion to back the ETF’s value.
The giant SPDR Gold Trust (NYSEArca:GLD) in contrast shrank by 2.0%, cutting the volume of gold bullion needed to back the GLD’s shares by 17.2 tonnes to a 3-month low of 835 tonnes.
For the spot gold price in US Dollar terms, “support comes in at the $1200 level,” reckons the latest technical analysis from strategist Russell Browne at London bullion bank Scotia Mocatta’s New York branch, confirming his turn to “bearish” on both gold and silver, with the cheaper metal set to perform worse with a target at the April 2016 low of $14.78 per ounce.
As gold and silver bounced from 8am’s new lows in London, major government bond prices also rallied, nudging longer-term interest rates back down off their new multi-month highs.
Ten-year US Treasury yields eased back to 2.37% after setting their highest cost of borrowing since early May, jumping at the fastest month-on-month pace since Donald Trump won the US presidential election with a promise to boost spending and cut taxes last November.
China’s gold prices earlier fixed at their lowest Yuan value since December last year in Shanghai, trimming the premium over comparable London quotes back below $10 per ounce, down over half-a-dollar from Friday’s 6-week high in the incentive offered to new bullion imports into the world’s No.1 consuming nation.