GOLD PRICES held below Friday’s 7-week closing low near $1270 per ounce in Asian and London trade Monday, edging back as the US Dollar rallied from 30-month lows versus the Euro currency despite news of stronger than expected jobs growth and inflation across the 19-nation union.
Silver rose to set new 5-week highs at $16.88 per ounce while commodities held flat overall.
World stock markets edged higher as major government bond prices slipped, nudging 10-year US, German and UK bond yields 0.01 percentage point higher.
New US Treasury secretary Steve Mnuchin told lawmakers leaving Washington for the summer recess on Friday that they have until 29 September to agree a rise in the US government’s legal debt ceiling or risk a shutdown in key departments.
Neither the House nor the Senate are now in session until Tuesday 5 September, giving just 2 weeks of business time after they return from holiday.
Nearing $20 trillion, US federal debt has grown by one-third since the 2011 debt ceiling crisis, when ratings agency S&P downgraded Washington’s standing from ‘risk free’ AAA for the first time – a move yet to be reversed – and Dollar gold prices jumped towards their current all-time record highs above $1900 per ounce.

“Look at how the Dollar moved up when it was felt that the Trump election was going to lead to happy days again,” says John Snow, Treasury secretary under George W.Bush and now chairman of asset manager Cerberus Capital.
“[Today] it looks like the administration’s ability to get things done, like infrastructure spending and tax reform and health-care reform, are not being realized.”
“This is an administration that has shown it can’t get anything done. Absolutely nothing,” the FT today quotes Mark Zandi, chief economist at S&P competitor Moodys Analytics.
Looking at the Federal Reserve’s plans for start unwinding its $4.5 trillion QE holdings of US Treasury and other bonds as soon as its September meeting, “The biggest risk is the debt limit and any tightening of financial conditions,” said Bank of America Merrill Lynch rates strategist Mark Cabana last week.
Betting on the US central bank keeping its key Fed Funds rate below 1.25% until the start of 2018 has jumped over the last month, raising probability implied by interest-rate futures contracts from 39% to 54% according to data from the CME Group.
Betting on gold prices rising last week leapt 160% net of bearish bets amongst the ‘Managed Money’ category of Comex traders, data from US regulator the CFTC showed Friday. 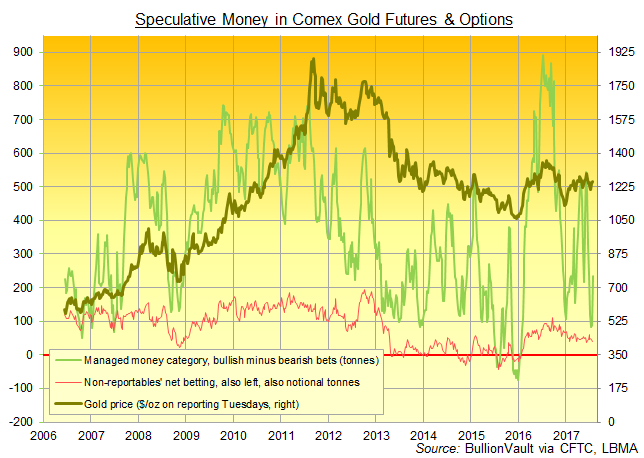 The fastest increase since January 2016 in the net long position of hedge funds and other money managers, it took that category’s overall bullish betting back to the strongest level since late June, reversing the previous 4 weeks’ drop to the smallest level in almost 18 months.
Over the last 11 years of available data, the net speculative long position of Money Managers in Comex gold futures and options has shown an average weekly correlation of 0.74 with gold priced in Dollars – highly significant on a statistical basis.
That figure would read 1.00 if they moved perfectly together, or -1.00 if they moved exactly opposite.