GOLD INVESTING prices rose back near $1270 per ounce in London trade Tuesday, gaining some 0.3% for the week so far as world equity prices rose, major government bonds slipped, and the ‘offshore’ Yuan – known as CNH, traded outside China, and so moving more freely than the onshore CNY – set new lifetime lows against the Dollar.
Asian stock markets rose outside China, and commodity prices edged near 3-month highs.
The Dollar also gained against other emerging-market currencies such as the Turkish Lira, and held near multi-month highs versus the Euro, Sterling and Japanese Yen as well.
The plunging Yuan may curb the US Federal Reserve’s comments on raising interest rates, forcing the Fed “to rein in some of its more hawkish rhetoric because of the strong Dollar, negative risk feedback loop,” according to French bank BNP Paribas’ FX strategist Sam Lynton-Brown.
Betting in US interest-rate futures now puts just a 9% chance on the Fed raising next month, immediately after the US presidential election, but the overwhelming view is for a hike to 0.75% at the central bank’s December meeting. 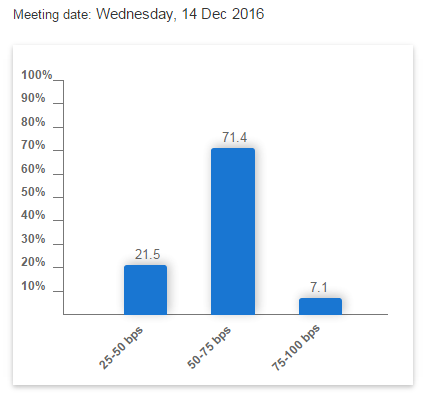 Overtaking India as No.1 consumer in 2015, China may see gold demand increase “as a way to hedge potential currency depreciation in the face of capital controls,” reckons US investment bank Goldman Sachs in a new analysis, pointing to the Chinese Yuan’s new 6-year lows on the FX market.
Gold investing in China may also benefit “as a way of diversifying away from the property market,” the Goldman analysts say.
But jewelry sales in China have sunk in 2016 to date, diving by 17% at the mainland’s No.1 retail chain Chow Tai Fook (HKG:1929) during the 3 months ending September, and falling 37% globally for competitor Luk Fook (HKG:0590) on a same-store basis.
“There has been slight improvement in gemset sales in Hong Kong and Macau,” says Japanese brokerage Daiwa’s analyst Jamie Soo, quoting management comments, and mainland Chinese sales apparently improved during the Golden Week holiday in early October.
India’s gold demand will meantime fall to the lowest full-year total in 2016 since the global financial crisis of 2009, according to a sample of 5 jewelers and traders polled by the Bloomberg news-wire.
“There’s not much you can do…The whole industry is suffering,” Bloomberg quotes 6th-generation retailer Saurabh Gadgil, saying that discounts and promotions have failed to stop 2016 becoming the worst year he’s known since taking charge of P.N.Gadgil Jewellers in 1999.
“In my 33 years in the market, physical demand has never been this dead,” the news-wire also quotes Swiss-based refining and finance group MKS Pamp’s chairman Marwan Shakarchi.
“It’s a sign the government is serious about cracking down on black money” – meaning undeclared assets and illegal transactions now trapped by the Income Disclosure Scheme and PAN tax card rules imposed early in 2016.
“Indians now have 1.1 billion mobile phones,” said Shekhar Bhandari, senior EVP and business head for global transaction and precious metals at Kotak Mahindra Bank (NSE:KOTAKBANK), during last week’s India panel discussion at the London Bullion Market Association’s annual conference, held in 2016 in Singapore.
“This digital shift gives rural people the chance to use formal banking products,” Bhandari said, adding that the government’s drive for “financial inclusion” could pose a challenge to physical gold’s traditional role as a savings vehicle.
Kotak today reported a 43% rise in quarterly profits from a 17% rise in the bank’s net interest income.