BUY GOLD prices fell to new 9-month lows in London on Thursday, extending their steepest 1-month decline since the crash of spring 2013 as Western stock markets also fell with government bond prices, pushing interest rates higher ahead of mid-December’s US Fed policy decision.
Ten-year US Treasury yields traded above 2.40% as New York opened for business – well over two hikes of 25-basis points higher from before the election of Donald Trump – as commodities rose again, pushing crude oil back above $50 per barrel following yesterday’s Opec cartel agreement on cutting production.
Rumors that Beijing has restricted the number of import licenses for bullion continued to spread, dampening households’ ability to buy gold in the world’s No.1 consumer market.
Reports from world No.2 consumer India meantime said the “cash crunch” following November’s shock move to ban 500 and 1000-Rupee notes – worth 86% of all currency in circulation – has squashed demand to buy gold amid the key Hindu wedding season by as much as three-fifths.
Apparently aiming to slow the outflow of currency from China, “[Beijing’s] effort to slow down imports of gold reminds us of similar Indian efforts,” says a note from French investment and bullion bank Natixis.
“Having both countries, which account to around half of the world’s demand for gold, put brakes on imports at the same time is of particular concern for gold prices next year.”
Prices to buy gold in large, wholesale bars fell 7.4% in November from the end of October – the steepest decline since June 2013 capped the metal’s worst quarterly drop in three decades. 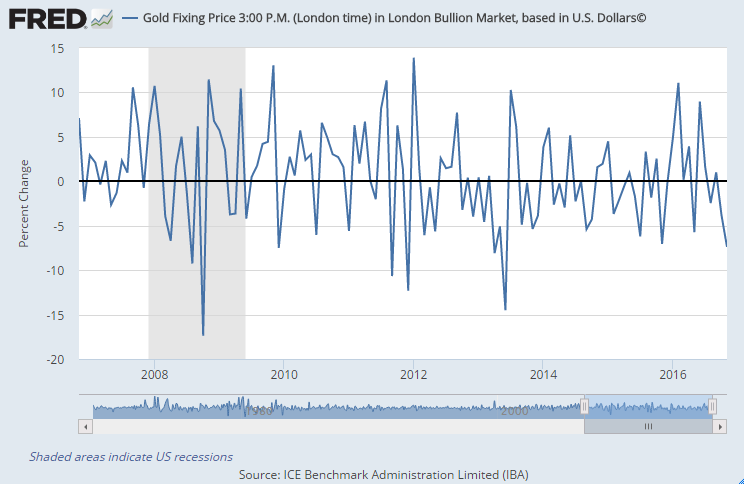 Exchange-traded trust funds backed by gold – a key investment vehicle for US money managers wanting to buy exposure to the metal – have now shrunk 14 trading days running, says data from Bloomberg.
Ahead of US president-elect Donald Trump’s inauguration on 20 January, “We will be closely watching [his] economic plan,” says Bernard Dahdah at Natixis.
“We could potentially see rates in 2017-18 rise at a quicker pace, due to inflationary pressures…and this could potentially lead to a stronger Dollar and weaker gold prices.”
With the US Fed now certain to raise its key Dollar interest rate to a ceiling of 0.75% on 14 December according to betting on CME futures contracts, gold bullion has also fallen hard against all other major currencies, losing almost 3% this week so far against the British Pound to trade at £923 per ounce on Thursday.
Prices to buy gold with Pounds Sterling hit a 3-year peak of £1070 in the two weeks after the Brexit referendum on 23 June saw the UK vote to leave the European Union.
Wholesale prices for Eurozone investors to buy gold have now halved their 2016 gains, retreating from their Brexit highs of €1244 per ounce to dip through €1100 for the first time since 22 June on Thursday.