PRICES to buy gold in London’s wholesale market headed for a 1% weekly drop Friday, slipping to $1166 per ounce as the US Dollar extended its gains following Donald Trump’s US presidential victory, denting currencies worldwide including China’s Yuan ahead of next week’s Federal Reserve decision on interest rates.
US stockmarkets rose further from yesterday’s new all-time highs, while commodity prices also gained and bond prices slipped – nudging longer-term interest rates higher.
Silver prices held above $17 per ounce, adding 1.7% from last Friday for US Dollar buyers.
The Fed is almost certain to raise its key Dollar interest rate ceiling to 0.75% next Wednesday according to futures market bets.
Despite the falling Yuan – now down near 8.5-year lows to the Dollar – Chinese premiums to buy gold, over and above London prices, held at $29 per ounce at Friday afternoon’s Shanghai Gold Fix.
That was just shy of last month’s 3-year highs, as traders continue to report a cut in the number of import licenses issued by the authorities, apparently seeking to stem outflows of capital to buy gold, and help halt the Yuan currency’s extended decline.
Indian prices in contrast remain at a $5 discount to London, Reuters reports, as demand to buy gold in the former No.1 consumer nation continues to sag amid the national cashflow crisis sparked by the Modi administration’s shock demonetisation of the country’s largest banknotes 4 weeks ago.
“Everything’s against gold at the moment,” says a Bloomberg story, noting the metal’s “fifth consecutive weekly loss, the longest run since November 2015, as the Federal Reserve gears up to raise rates.”
Western money managers continued to quit gold positions this week, with the giant SPDR Gold Trust (NYSEArca:GLD) now shrinking on 17 of the 21 trading days since Donald Trump won the US election.
That’s the worst run of GLD shareholder liquidation since the 32 out of 35 trading-day outflows ending 28 May 2013 – midway through gold’s sharpest ever quarterly price drop.
Currently losing 11.6% for Q4 2016, gold prices today headed for their 10th worst quarterly drop of the modern period.
Starting from last December’s 6-year low following the Fed’s first rate hike from zero, the opening 3 months of 2016 saw the strongest quarterly gain since 1986 at 16.7%. 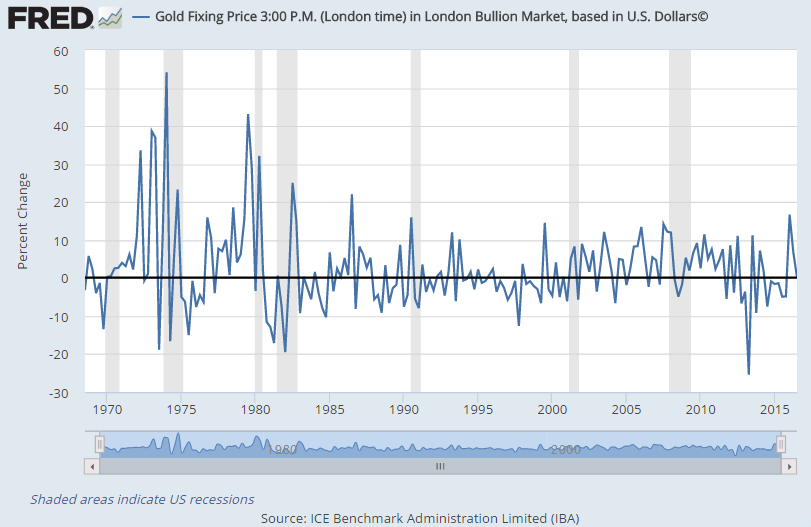 “With the US Fed most likely to raise interest rates next week by 25 basis points, the firmer Dollar is a very, very strong factor to limit any rally,” reckons Barnabas Gan, economist in Singapore for Oversea-Chinese Banking Corp, and apparently closest to calling Q3’s zero per cent change in gold prices amongst analysts polled by the Bloomberg news-wire.
Price to buy gold with Dollars will hold around current levels in early 2017, Gan predicts, but lose $25 per quarter to end next year back at $1100.
Gold priced in Euros meantime held yesterday’s rise back above €1100 per ounce on Friday, unchanged for the week as the single currency fell following the European Central Bank’s decision to extend quantitative easing right through 2017.
Rallying 2.5% from Monday’s drop to 8-month lows to stand 14% higher from New Year, the gold price in Euros has now halved its 2016 gains compared to July’s peak at €1244 per ounce.
Back in China, and after restricting Dollar purchases as early as January 2016, both state-owned and private commercial banks are now offering bonus rates to customers selling US Dollars for Yuan and charging higher fees to Yuan sellers.
Chinese airlines have cut their Dollar-denominated loans – needed to buy foreign-made aircraft – switching to Yuan bonds or other currencies, Air Transport World reports.
Some foreign companies are meantime being blocked from remitting dividends abroad according to the Financial Times.
Now the world’s No.1 mining, central-bank buying, and consuming nation, China saw its notionally Communist government actively encourage private demand to buy gold as prices slipped from their all-time record highs 5 years ago.
China’s demand to buy gold bullion will next peak in January as the key Chinese New Year holidays approach.