BUY GOLD prices rose to 2-week highs against the Dollar on Thursday as the US currency fell following yesterday’s “no change” decision on Federal Reserve interest rates and QE.
Gold priced in Dollars touched $1344 per ounce in London wholesale trade, making it the most expensive to buy since July 14 – one week after the 2-year highs hit in the aftermath of the UK’s Brexit referendum result.
Prices in Euro and Sterling terms also rose, adding 0.6% and 1.8% respectively for the week so far.
US Treasury bond yields edged higher as world stock markets held flat overall but commodities rose.
Silver jumped faster than prices to buy gold, gaining 4.4% for the week so far to reach $20.50 per ounce.
Betting on US interest-rate futures now put the odds of a hike at the Fed’s September meeting to 0.75% further below 1-in-5.
“Near-term risks to the economic outlook have diminished,” said the Fed’s July statement, but while “indicators point to some increase in labor utilization in recent months [and] household spending has been growing strongly, business fixed investment has been soft [and] inflation has continued to run below the Committee’s 2% longer-run objective.
“Longer-term inflation expectations are little changed, on balance, in recent months.
“[So] the stance of monetary policy remains accommodative,” the Fed concluded, and it will keep re-investing money from maturing bonds in its $3.7 trillion QE program of 2008-2014 at least “until normalization of the level of the federal funds rate is well under way.”
The Fed funds rate stays at 0.5%. It has averaged 5.1% over the last six decades. 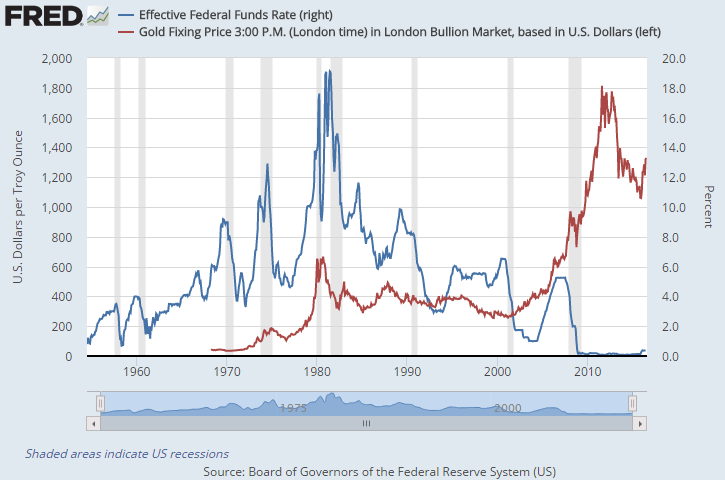 “We maintain a longer-term target of $1450,” says the latest technical analysis of Dollar gold prices from German financial services group Commerzbank, but “short term we suspect that the market will opt to consolidate around current levels.”
“Near-term resistance lies at $1375 [early July] high…the 38.2% [Fibonacci] retracement at $1381 of the move down from 2011 [and] also the $1392 peak of 2014.”
Looking at the investment case for buying gold, “Being long gold is the same as being short politicians,” said Jeff Currie, global head of commodities research at Goldman Sachs, to Bloomberg on Wednesday.
“There’s lots of uncertainty in the world today, and gold makes a great strategic hedge against those.”
Industrial commodity producers meantime reported a raft of write-downs and profit drops, with Anglo American (LON:AAL) taking a $1.2 billion charge on Australian coal projects it is currently trying to sell in a bid to reduce the miner’s net debt to $10bn.
Oil giant Royal Dutch Shell (LON:RDSA) reported a 93% drop in quarterly earnings, while commodity giant BHP Billiton (LON:BLT) said it’s putting up to $1.3bn aside to cover costs from last November’s Bento Rodrigues dam bursting in Brazil, since called the country’s worst-ever environmental disaster.
Local mining giant, and BHP’s partner in that iron-ore project, Vale (BVMF:VALE5) is also making provision of $1.2bn.